Posted on November 5, 2011 by lucas2012infos | Comments Off on Stunning Number: Big Banks Set To Lose 70,000 Accounts On Move Your Money Day

By Gilian via http://www.shiftfrequency.com 5 th  November 2011 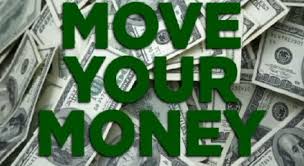 Just this week, Rebuild the Dream (an organization that [Van Jones] helped to found) launched a Move Your Money website, where people are pledging to close their accounts at Wall Street banks in protest of their outrageous behavior before, during, and after our nation’s financial crash. I am stunned to report that as of this morning at 9am Pacific, people have pledged to close 69,127 accounts at big banks, and the number keeps climbing.

Tomorrow is a big day. Saturday, November 5 is a huge “Move Your Money” day. Tens of thousands of people all over the country will leave the big banks and move their money to community banks and credit unions — where people remember things like customer service and loyalty.

For the past decade, our economy has been hijacked by Wall Street banks. Banks that knowingly made bad loans to homeowners and sold them as “can’t miss” investments. Banks that took our tax money to bail themselves out, while handing out billions in bonuses to their executives. Banks that have so far escaped accountability for their role in our nation’s economic crash.

If you use a big bank, like so many of us, now’s the time to make a change.

We need to stop feeding what we are fighting. Let’s fund banks that will fund our American dreams, not our American nightmares.

Within our own wallets, we have the power to hold Wall Street banks accountable. We can move our money to community banks and credit unions, institutions that are responsive and accountable. to the communities we live in. Community banks know that they depend on the well-being of local residents and the local economy. Credit unions know that they thrive only if their account holders thrive. In other words, they put people before profit. Wall Street banks have it backward, sacrificing people’s life savings and homes just so they can prop up their stock price.

We already know that the big banks are paying attention. Just this week, after public outcry over proposed monthly debit card fees, the big banks backed off. This is good news. Now let’s make sure they know they need to do a lot more than just give us back our $5.

Already, tens of thousands have pledged to move their money this weekend. I’m proud to count myself among that number — I’m in the process of moving our family’s money out of a zombie mega-bank and into a community bank. The more people that join in the exodus from Wall Street banks, the louder the message that the banks will pay for the damage they’ve caused to our economy.

Does it sound hard to switch banks? It’s true, it’s not always simple. Sometimes, the hardest part is getting started. Here are some resources to make it easier.