Wes Annac – The Ascended Masters: “You Have Been Transmuting Very Dense Patterns of Living” – 4 November 2011 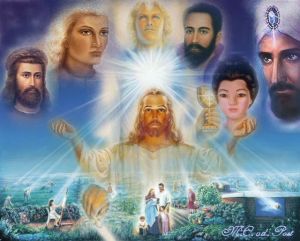 Blessings to every dear soul who read these words, we are the Ascended Masters, and we come to you humbly on this glorious time in your awakening. As has been agreed to by our scribe, we would first like to give you a bit of an update on our end, and follow with some questions from our scribe that have to do with matters relating to your ascension and to the purging of darkness from your world.

At present, your world appears to be in chaos. As you look all around you, it seems clear that the world has reached a state that is truly beyond repair. For too long the few on your world have enjoyed all of the benefits, as they have taken away the rights of the majority of you so they could further their domination of you and your world. Gaia has made it more than clear to us that she is ready to see the last of the darkness wiped away from her surface, and this is something that you are all helping with more than we are. You have all been transmuting very dense patterns of Living that you have grown used to for over a millennia in the lower vibrations. As this happens, naturally the series of events that used to lead to a victory for the dark on your world, are instead leading to victories for the common man, for the many of you on Earth who for too long have had to deal with lower-vibratory situations that you were somewhat stuck in.

The dark on your world are finding that the energies they used to thrive off of that were fed by the ignorance of the masses, are becoming more and more scarce. The precious life force of all of you, who have not known the true agenda of the governments of your world, is now being fed through your own spirit complexes rather than through the spirit complexes of the dark entities who have fed off of you for so long. The dark in power on your world can be considered a perfect example of these types of souls, as they have performed many free-will invading rituals that served to directly take the higher energy of the common man away from the common man, to them where it is then beaten-down and turned into lower energy, energy of a vibratory nature that not only suits them, but serves to empower them. They are able to do this through the unhealthy things they have gotten you to put into your bodies.

Many of the ingredients in some of your most unhealthy foods and drinks have been tampered with; they (the elite) have cursed the very atoms that make up the ingredients of the unhealthy foods, in a way that the atoms of the ingredients serve to attach themselves to your chakras, and usurp nearly any energy coming through that you would have otherwise been able to consciously feel. Instead of you feeling your own higher dimensional energy, it is then taken away from you and given to the elite on your world, and this transformed energy is what gives them much of their power. Of course, simply feeding off of your energy wouldn’t be enough, they also use the cursed atoms of those ingredients to close your chakras, which is an effort they thought they could get away with, suffice to say we no longer let that happen.

For those whose karma clearing requires their chakras to be temporarily closed, those atoms will serve to do the job they were meant to do by your dark. However, those numbers are increasingly smaller, as so very many of you awaken to the fact at you have been lied to and deceived in so very many ways. As you awaken, so do the many methods of control that were used to keep you in the dark begin to disintegrate as they have no more effect upon you. We have spoken endlessly of how darkness and dark energies simply cannot exist in a Light-filled spirit complex, and you are now all filling yourselves with the Light and Love that will serve to take the dark energies far away from you, never to be felt or experienced again.

Wes: Thank you for that update friends, it is very much appreciated. As strange as this seems, I am actually finding myself having trouble thinking of something to ask you about.

AMs: But dear soul, there is so much going on at present!

Wes: I know, I know, I feel like a kid in a candy store. That has been one of my problems; I want and want and want for something only to find that when I have it, I do not know what to do next!

AMs: Such is the way with many on your world dear soul. Many will lust after something mercilessly because they perceive that they cannot have it; only to find that when they have what they desired, it does not seem to Live up to their expectations. These are ego issues dear soul, and just the mere fact that you are working them out before us and before humanity shows that you are evolving according to Divine plan.

I know before that you and other Divine sources I have spoken with have been hinting at some of the Divine miracles that are to be manifesting before our very eyes shortly. Would you care to tell us a little bit about that?

AMs: Well dear soul, you have already experienced the beginning of these manifestations. Remember that energy you were perceiving, on the grass and trees?

Wes: Indeed I do. I feel it was higher dimensional energy being sent to the plant kingdom straight from the sun.

AMs: And you would be correct dear soul. However, it is never that simple. This energy that you are beginning to perceive is part of a universal network of Logos energy that has underwent a huge process in connecting with Mother Earth. You see, it is very difficult for Loving energies of a higher nature to really reach a planet as based in darkness as your world has been, because the lower energies serve to do everything they can to see that the higher energies do not have their day in the sun so to speak. It can be compared to the situation on your world right now. The higher forces of Light are intervening directly in your affairs, but the dark energies that are incarnate as your elite try to refuse the Light, try to refuse the fact that the time of the dark on Earth is truly over. The same types of events play out on very many different levels dear souls, and the elite on your world trying to block the Lighted beings from showing themes to you openly, is simply a manifestation of the ‘battle’ between the dark and Light on the 3/4d planes of Earth.

As the elite on your world try to deny the Light, so did the lower energies that had practically run your world for a millennia try at first to deny the higher energies that were coming in. It was quite a process, breaking through the very tight hold that the dark energies had and maintained over Earth for so very long, and it was a huge effort on the part of many of us Ascended Masters, as well as many of what you would term ‘extraterrestrials’ and Archangels. The biggest ‘players’ in these happenings were in fact the higher energies themselves, as even though we are all Logos energy in some kind of manifestation, the energies that we initially helped to send through to your dear Gaia were of a very higher dimensional nature; they come from a realm of unity with Mother/Father God, with the Source of all, that is our Heavenly Creator. Some of us ascended still have yet to reach such levels, but suffice to say we did our part in anchoring this Logos energy that we are to be in our even further ascended forms.

Though we do not experience time in the heavenly realms, the ‘time’ that this energy really broke through (the first time) unto your physical world, was the time that you would term the 1960s, particularly toward the end (of that decade). That was the time period that many sensitive souls who were at first conforming, began to feel these higher energies that were surpassing the lower vibrations and making their way through the core of Earth as well as the cores of each and every one of you. The energy, once broken through, really boosted in scope and purity, and this is what helped to cause the mass awakenings that took place in the 1960s of your time. However, the energy that came through at first was so pure, was brought through so quickly and intensely that even as they were felt by you all, it became clear to us and to Earth’s Higher Council that a bit of a collective breath needed to be taken, so to speak. The energies were so very powerful that they awakened many very fast, and caused a whiplash of chaotic events. These events were caused by the Light energies exposing the very dense and long-held dark energies, which responded to this ‘outing’ with much panic and negative action being taken and manifested through those souls who were still feeding off of the then-injured darker energies.

So, we decided to give it a bit of a break for a while as we let you all go through the last karmic experiences you would ever need to have, until of course the 1980s and 90s of your time, when we then turned this energy up once again. The reason the same effect did not come forth when we brought through these energies once again, is that since the beginning of your 70s many of you had been trapped back into a dualistic mindset, a mindset that was so dense and prevalent in you that the energies did not have the same effect that they initially had on you all. Ever since then, we have been further increasing the purity of these energies as we open more and more universal chakras or ‘energy gates’ to bring them through. You are now beginning to reach the point that you reached at the end of your 60s, and at the end of your final Atlantean cycle. Only now, instead of a civilization getting destroyed or soft conditioning becoming the rule of the day once again, you are to all finally take on the ascended forms you have so dearly deserved to rediscover, ever since you decided to briefly leave your Home and your true selves in the Heavenly realms.

Wes: Thank you to the Ascended Masters for that wonderful and enlightening message. I am eternally grateful to all of you.

AMs: And we are so very grateful to have an outlet to express ourselves to all of humanity! As you will soon come to learn, we feel we are the privileged ones for being able to communicate with humanity at this time.

Wes: I believe it dear friends, thank you.

One response to “Wes Annac – The Ascended Masters: “You Have Been Transmuting Very Dense Patterns of Living” – 4 November 2011”