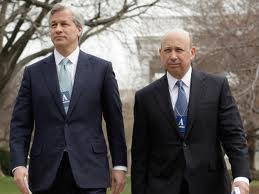 Now that it is clear that L’oyd Al-Blankfein’s evil regime at Goldman Syria has the natives in open revolt, I think it’s high time the UN stepped in to boycott the firm’s products. Before fleeing dissident Greg S’mith’s open letter to Nu YorJhatimes, of course, we all knew anyway that Goldman was up to no good. It was bankrolling Greek embezzlers and working with the terrorist organisation Hedgbofund, but the point is that, now weve been told they crap on clients, well….we have no choice but to condemn it.

Although the company’s absolute ruler Al-Blankfein has been trying all week to stem the revolt by promising reform along with mass executions for anyone who utters so much as a peep to the press, few outsiders are impressed: it’s the Wall Street Spring. For the likes of the Beastly Blankfein, the game’s up. Already, L’oyd is creating fear by referring to the uprising as “obviously the work of the fanatical group Hairee Occ Up’iah”.

That moderately nasty sociopaths may only make way for psychopathic serial paedophiles is always a worry in such situations. Although himself a strict observer of the Munee religion, Al-Blankfein belongs to the fairly benign Demacrasch sect who worship former firebrand-turned-lapdog Obama Ba’rach. But analysts are concerned that neighbouring Munees may simply export supporters of the fundamentalist Gop tendency to replace L’oyd’s heinous regime.

Ambassador to Goldman Syria Tim-ge Eifna urged caution before attacking the firm’s practices too violently. “Remember, most of the bankers in our country cost the poor people hard-earned cash with bailouts and overcharging and foreclosure sh*t,” he observed, “whereas with Goldman it’s different – these guys are stealing from the rich.”

Some GS insiders do think that the can of worms should remain unopened.

“The Gops chop the hand off any trader found honestly advising Infidel Muppets,” said an informant on the Goldman assets floor, “so the last thing we want is someone like, you know, Diamond Geezah running amok in here.”

Nevertheless, opposition groups are drumming up a great deal of sympathy in the liberal media. Core democracy group Behead All Clients  is now holed up in the derivatives group, and surrounded by goons loyal to Al-Blankfein .

“They have us cornered in here,” said a message smuggled out to liberal daily El Gardianista yesterday, “but our guys are working hard to leverage one of the stapling machines into a bazooka. When we launch our secret Obligations Missile system, the despicable Al-Blankfein regime won’t know what’s hit it.”

L’oyd Al-Blankfein himself, whose wife is rumoured to go shopping while ordinary auto workers go without even making mortgage repayments, is unrepentant.

“Get rid of assholes like me,” he smiled, “and all you’ll have next week is somebody even worse”.