John Ward – Happy Easter, Bilderbergers! Here’s A Little Problem For You To Think About…. – 6 April 2012 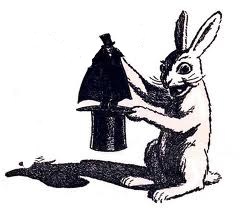 …how do we deal with indeflation?Dazzled Bilderberg rabbit pulls dead economist from hat

Bilderberg is with us once more, this time in Sitges. As something capable of generating conspiracy theories, it is beaten only by the Madeleine McCann case. But The Slog wonders if these people are really in control of anything.

I’m not sure if Bilderberg runs the world, or whether it’s the Zionist Elders, Common Purpose, the Kremlin or the Masons. But let’s assume for the sake of argument that all these Bilderberg power junkies with dicks where their brains should be are pulling most if not all of the strings – as opposed to just themselves. They’re not very good at dealing with the crisis, are they?

Well, you might reply (wearing that earnest look adopted by conspiraphiles the world over) not if you think that their goal is to reduce us all to starving slaves. Yes, that’s possible. Except I think they have only one goal: power. The consequences of what they do with it are of no concern to these plonkers. If they were, we wouldn’t be living with the consequences now. The world’s problem right now is not that a secret society is running it; it’s that nobody’s running it.

But let’s park that one, for it is a divide that will never be bridged. My sole purpose on this beautiful Good Friday morning is to put a simple question to all these VIPs: What do you recommend we do when indeflation arrives?

Longer-term Sloggers may remember that three years ago, I invented the word ‘indeflation’ as a description of what awaits us. Or rather, I thought I had: further research from time to time dug up the fact that American investment guru Doug Fabian mentioned it on his site at the same time.

His interpretation, though, was infinitely more succinct than mine. I wrote that we would have rising tax, service, water and energy costs alongside falling durable, food and property prices. Mr Fabian’s analysis was more elegant, and I found myself attracted to it. His ‘indeflation’ was based on two simple principles: that there will be price inflation, but asset deflation: that consumables would cost more, and investments/housing/pensions would be worth less. It was the cost  vs asset worth insight that attracted me. A personal history (and likely future outlook for most of us) suggests he was spot-on.

Until recently, the ability to take advantage of the gold price had enabled me to preserve net wealth – meagre as it is. When gold topped last year, I sold all of it. Now (see post of earlier this week) the pension pot has fallen in value, as have my property investments. So I’ve had to go into the rental business for half the year on the UK house. We have gone from being asset rich and cash OK to being asset OK and cash poor.

It can only get worse in the immediate future. As more sovereigns and banks collapse under the weight of their debts, notional funny-money obligations will start to seep into the real system, and nations the world over will print fiat currency in order to turn the abstract into the concrete…or put another way, silly bankers’ games into a millstone. That will depress asset values, and inflate currencies. So by then, we’ll be asset poor and cash deficient.

No cash = no demand. Falling demand means lost jobs, mortgage defaults, less tax income for governments and higher welfare costs…which they are now cutting. That will depress asset values further, and reduce demand further still. Unable to pay even reduced welfare, sovereigns will print more money. So by then, we’ll be in the hedgerows in search of free nutriment.

Most citizen consumers will be far worse off than we are. Even though they had a lot less to lose, the bottom line for everyone will be ‘skint’. And this is the dilemma for the Bilderburglars: what happens then?

In 2008, I was an almost lone voice saying that reducing interest rates was in economic terms a terrible mistake. But then, economics had nothing to do with it – any more than quantitative easing was about increasing liquidity to produce new business loans. QE and Zirp were introduced to save the banking system, pure and simple.

Four years on, the banking system is still in terrible shape, and the sovereigns that foolishly rescued it even deeper in the quicksand of debt. But the economic reality is both terrible, and entirely predictable: there is nowhere near enough demand to enable economic recovery, and no more real money left for stimulating that economy. So, more printing, more job losses, more inflation, more asset deflation. By this point, we’re out of hedgerow berries, and shooting the wildlife….while secretly fattening up the neighbours.

The ‘peak oil’ theory comes into its own at this point. If there’s no demand for oil, then just like any other asset it falls in price. This makes the exploration of it uneconomic. Less income for the oilcos plus fewer reserves to brighten the future produces falling stock values, further falls in investment income, the potential for major stock market collapse….and the destruction of the Russian economy.

It’s possible that the current hype about oil ‘shortages’ and reserve-tapping is designed to both push its price up and nip any panicky market selling in the bud. (See  Slogpost last week on the oil ‘price’ scam).

Looking back now to laugh out loud at the pathetic confidence of 2006, by comparison what we have in the West today is a much greater dilution of currencies than most people expected, far more notional obligations than most people realised, and collapsed house values about to fall off a cliff. House prices continue to head south in the States; and no US economic recovery has ever been managed without a recovery in the domestic property market. All of us are left with a dearth of confidence, the unhappy victims of a profusion of confidence tricksters.

So, what most people in their right minds recognise is that we’re going to have stagflation in the West – that is, flat or declining economic output alongside rising living costs. And economically, we have what you might call an investment gap: less real-value money to stimulate economies, and less oilco money going into tapping reserves.

Unless somebody can find a way to plug the gap that doesn’t involve can-football, we will spiral into the worst slump the world has ever witnessed….one in which nobody buys or sells anything, every sovereign is bankrupt, no asset is worth even a row of beans, society breaks down, and the neighbours will be on the barbecue just as soon as we can raise the £5.5M for a bag of charcoal.

Under this scenario, a ‘Global Spring’ takes place…with all the unpleasant consequences that we’ve seen in North Africa. Because when you indulge in believing Friedmanite bollocks about wealth trickling, what happens is an ever-broadening concentration of wealth in a few hands. And when you let bankers invent money to enrich themselves at no advantage whatsoever to the real economy, the other 93% get wiped out financially. And both those things make any kind of meaningful economic recovery impossible.

That’s the thing with globalist monopolism: it ain’t entrepreneurial capitalism, because the capital isn’t being used to create wealth – it’s being spent on the pointless process of monetising unreal debt and paying bonuses or dividends. The end of the road for the contemporary economic model (or perhaps Can of Worms for the kicking of) is no demand and no investment: worldwide idleness.

So that’s my question, Bungleburgers: what now? Are your brains up to this, or are they now so farcie with penile dysfunction, the only ideas you’ve got are somewhat limp fantasies from the past?

Here’s my twopennorth. The property market is doomed anyway: so rack up interest rates, and give the most debt-free consumers the chance to kick-start things in our economies. Write off all the notional debt: it’ll all be worthless in the end anyway, but in letting this money-mirage run, all we’re doing is increasing the price of something that has no real worth. Stop printing any more fiat currency, and tie it to a standard: not gold, but energy. This will make energy worth finding and inventing for the long term….rather than its price yo-yoing up and down. Dump globalism-driven volume, and make the aim high-margin trade with Asia backed up by increased domestic self sufficiency: this way, we can end the zero-sum (and militarily dangerous) game of mercantile wars. Separate every retail and investment bank in the world, while restricting investment bank leveraging – and making it clear that every failure in future is a bank and shareholder problem: in an ideal world, I would take all banks off the bourses. And alongside this – because these lunatics own far too much of the capital provision market – diversify the source of capitalist funding into more stable and hands-on sources: capital-rich individuals, mutualising more companies, community venture capital, retail banks specialising in small business, but NOT – never, never, never – the State. Because above all, we need to make positive reductions in the scope of the State, not panic-stricken cuts in everything: mutualise and empower the employees of almost all civil service functions, education at all levels, and health services.

Ultimately, the power that Bilderberg and its organisers crave is no substitute for balls and creativity. Power mania with no money to feed it leads inevitably to war. And major sovereign wars in the 21st Century mean the end of everything. The growing attacks on liberty (and refusal to accept or even countenance democratic opposition) are there for anyone to see: from unelected Fed Reserve manipulation of the markets via Draghi’s subordination of Greek bondholders to Merkel breaking laws, treaties and constitutions with the customary insouciance of a DDR control-freak.

I’m sorry to disappoint those who see Bilderberg behind everything. Mainly I think these onanists are simply behind the music – past their best, past caring, and part of a past with no future. We are going to get a global Spring (in the worst sense) after this barren winter unless the Big Plan – and the will to put it into practice – turns up soon. But without new ideas from which to rebuild, we will simply be replacing Assads with Islamists.

To free those ideas for discussion and adoption requires the dismantling of the political and administrative apparatus of the US, the EU, and the UK. Does anyone really see that happening? When the MPs’ expenses scandal broke, Obama was elected President, a new UK Coalition seemed keen to change things, Newscorp was on the ropes, and the debt within the eurozone raised hopes of Brussels destroying itself, some of us did think it just might be on. But if it is, it’s taking one helluva long time to build up a head of steam. And while it does so – if indeed it is at all – time is running out at an accelerating speed.

So then, Happy Easter Bilderbergers! This may be your last chance to avoid crucifixion.

Like Loading...
This entry was posted in Article, reblog and tagged 2012, 6 April, Disclosure, Earth, Happy Easter Bilderbergers! A Little Problem For You To Think About.., John Ward, news, Spiritual evolution, World. Bookmark the permalink.

2 responses to “John Ward – Happy Easter, Bilderbergers! Here’s A Little Problem For You To Think About…. – 6 April 2012”