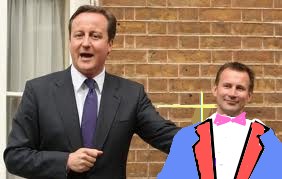 After deliberating since May 2010, the Public Opinion Committee today found that Old Estonian Prime Minister Cavedin Dammerung had ‘wilfully misled’ the British people, and turned a blind eye to Mr Buggerme Shunt’s habit of sending emails to Newscorp saying things like ‘I say, we shall lead them a merry dance what, and then have scones and cream later – what a lark!”

The POC also dismissed Mr  Cameldung’s  claims to be Eurodyslexic, but acknowledged that he might well be a cnut.

In addition, the POC Chairman Rupert Murdoch said he would like to express his thanks to the British public at large, who had allowed him to conduct a rigorously searching colonic irrigation of all things British since 1968, and more recently to exceed himself by stuffing Mr Avid Camoron every which way but backwards. He also praised the “noteworthy intervention” of Messrs Bark & Lee of the Sarky Sturmer in bringing Mr Vinny Livewire to justice – and then later revealing that the successor they had so lauded was a complete Hunt.

In mitigation, Mr Ladder-Rung asked for 6,209 cases of Colombian talcum-powder abuse, getting a leg-up into Carlton Television, illegal property development, and Bolsover bashing to be taken into account. He pleaded Not Quite Guilty when all’s said and done and Fairly Innocent on the grounds of diminished accountability let’s face it I think everyone should have a Second Chance.

The case continues to baffle everyone.