John Ward – Greece : Jubilation Is Premature… Nobody Has Factored In The Reality Of The Morning After – Pasok Still Wants Syriza in Coalition, Or No Deal – 18 June 2012

Posted on June 18, 2012 by lucas2012infos | Comments Off on John Ward – Greece : Jubilation Is Premature… Nobody Has Factored In The Reality Of The Morning After – Pasok Still Wants Syriza in Coalition, Or No Deal – 18 June 2012 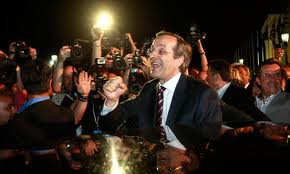 Yesterday I posted to advise folks to ignore the Greek election, and focus instead on the imminence of Greek default. I have more for you on this story already.

“There’s no time to lose or leeway for small party games,” said New Democracy leader Antonis Samaras in Athens last night, “The country must be governed.”While Samaras may choose to suggest that a lack of government is at the root of his country’s problem, the reality is that the stasis of the last two months has if anything allowed Greece to limp on without too many outside observers working out the inevitability of its doomed financial position. Although The Slog has posted extensively about Athens getting deeper in debt under the laughably titled ‘bailout’ terms (and recorded the appalling socio-medical effects of this), the fact is that Alexis Tsipras is right: Greece has barely enough money to last it until mid July.

There is also another element of the current ‘victory’ the MSM have conveniently overlooked: the fact that PASOK leader Evangelo Venizelos has said he would not join in a Coalition without Syriza….whereas Syriza says it has no intention of joining any government that finds the current bailout terms acceptable. Venizelos has lied with smooth aplomb about such things before of course, but it would be hugely embarrassing for Southern Europe’s fattest lump if he now went back on that condition.

Finally, nobody – not the Troika, Brussels, Berlin or the media outsiide Greece – has given much thought to a nation waking up this morning to the reality of tax bills that were held back until the election was over (handy for New Democracy, that one) or that, while Berlin mumbles grudgingly about extended payment periods and ‘relaxation’, the existing Troika assisted suicide note calls for the immediate enactment of more austerity by the incoming government, not less. Even with extended payback periods, the entire idea of Greece pulling out of this nosedive is farcical to the point of surreality: it’s economy is going backwards, vast sums are being withdrawn from the banks by Greek citizens, and the minute any government makes a false move, the plug will be pulled.

The eurozone finance ministers who said yesterday that Greece’s economic recovery requires “continued fiscal and structural reforms” are clearly not of this Earth. In a statement yesterday, they urged the “swift formation of a new Greek government that will take ownership of the adjustment program.” There remains only the small problem of an economy exporting nothing, and a Treasury collecting taxes with less and less efficiency as each month passes. Greece’s economy shrank further in the first three months of 2012, shrivelling at a yearly rate of 6.5%, against a backdrop of painful wage cuts, tax hikes and record unemployment.

Samaras surpassed himself with the euphoric bollocks he spouted at last night’s victory rally, observing: “The Greek people have voted for policies that will create jobs, foster growth, and provide security for Greece…Greece’s position in Europe will not be put in doubt, fear will not prevail.”

Apart from the Greeks voting for policies that have destroyed both jobs and growth, voting on the basis of fear placed there by Berlin-am-Brussels, and voting to keep the whirligig in motion, the ND leader’s remarks were really quite accurate. But as Kathemirini observes this morning, ‘last night’s result still leaves Samaras with plenty to do if he is to form a government’. Former PASOK education minister Anna Diamantopoulou was quick to repeat her leader’s pledge that “my Party would be unlikely to join a coalition without Syriza in it”.

The truth is that, without a big shift on the part of someone here, we are in the position I predicted yesterday – another stalemate – and the potential for a Coalition which, at best, will have a tiny majority. And if you’re keen to remain confused, let me end on this note of double-speak from Antonis Samaras: “We will honour our EU commitment to adhere to the bailout conditions, and our commitment to the electorate to revise the [bailout] memorandum.

So there we have it. If only we knew what it is.