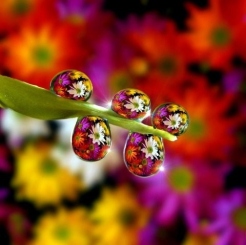 Have you stopped lately and asked yourself how much you appreciate life? The very act of living on auto pilot I so often speak about causes us to live life without thinking consciously of what we are doing. It deadens our appreciation for everything we have in our lives and life itself begins to lose its meaning. There is so much beauty to behold but do we really notice it? Take the dew drops in the picture to the left mirroring the flower beds behind them. END_OF_DOCUMENT_TOKEN_TO_BE_REPLACED

Comments Off on Visionkeeper – How Much Do You Appreciate? – 26 September 2012

John Ward – Monsanto NK603 : Doubts Cast With Claim That French Study ‘Only Used Ten Rats’ (Could It Be Planted Disinfo By Monsanto) – 26 September 2012

French researcher refuses to release findings for EU verification, but the Russians are worried enough to put brakes on Monsanto’s GM crop NK603

Russia yesterday suspended the import and sale of Monsanto’s genetically modified NK603 corn while  it reviews the latest research information on the product’s safety. Scientists at Russia’s Institute of Nutrition have been asked to review in particular a recent French study which raised questions about the long-term effect of NK 603 corn on rats. END_OF_DOCUMENT_TOKEN_TO_BE_REPLACED

A new poll shows that 60 percent of Americans have no trust in the country’s mainstream media, and interest in the news is dramatically falling. So why do Americans so largely reject the domestic media? Cenk Uygur of the Young Turks joins RT’s Liz Wahl to explain. (Thanks  Gillian- Shiftfrequency.com )

(NaturalNews) Intense industry pressure to continue mass medicating Americans with fluoride chemicals via public water supplies has apparently influenced Harvard University researchers to backtrack on a recent study they conducted that verified fluoride chemicals lower IQ levels in children. We are now being told the absurd lie that fluoride is only detrimental to people in other countries, and that Americans need not worry about ingesting and bathing in the toxic brew here in the states. END_OF_DOCUMENT_TOKEN_TO_BE_REPLACED

Sometimes keeping up with our societal decline becomes a bit too much. For example:

SPRINGTOWN, Texas — Like many schools in Texas, “spare the rod and spoil the child” might be considered the motto at Springtown High School. END_OF_DOCUMENT_TOKEN_TO_BE_REPLACED

Trade unions in Greece have called the first general strike since the conservative-led coalition government came to power in June.

The savings are a pre-condition to Greece receiving its next tranche of bailout funds, without which the country could face bankruptcy in weeks.

Read the whole story at : http://www.bbc.co.uk link to original article

At least 25 states in the US now mandate at least one formal assessment during kindergarten, Reuters reported on Tuesday.

(Photograph by Leah-Anne Thompson.) Such a fact speaks directly to a growing (and for many, a troubling) trend of high-stakes early childhood testing taking root across the country. END_OF_DOCUMENT_TOKEN_TO_BE_REPLACED

Read more about it here or the links below. ( Lucas: Not all that I post expresses my view on things  or is similar or even exchangable with my view on things. But I post it to  give you other visions and views on things that could be interesting. I will not tell you what to think.  I will write my own articles and comments to let you know what I think or feel and say that what needs to expressed when necessary. I ask always discernment  in all and when needed I state it again.)
U.S. Citizens Stuck With Trillions In Obama Orchestrated TARP Losses: States Must Nullify The Printed Paper Bailout ~ TARP Ceiling Was Raised 117 Times From $787 Billion To A Hidden $12.8 Trillion!
Chairman Of Rothschild Federal Reserve Board Confesses To $2 Trillion Swindle Against The American People: Iceland Puts The Corrupt In Jail.