The European Union moved a step closer Thursday to imposing strict curbs on excessive bonusing of investment bankers, blamed by many of those who are awake for causing ‘risk-taking behaviour’. Predictably, every banker in the world immediately said the scheme would backfire, which did make the action by Barclays  – to claw back bonuses they’d already given to employees (to pay fines) – look curiously muddled: if capping bonuses will backfire, what will grabbing them back do – start off a nuclear chain reaction to wipe out the galaxy?

But Stephen Fraudster at the Treasury-owned bank RBS wasn’t having any truck with misguided pay-control nonsense: in one fell swoop of the vulture, he announced a whopping loss of £5.165bn (the fifth in a row) and a bonus pool of £287m. Tucked in nicely in the results was a £1.1bn charge for PPI mis-selling, £700m for mis-selling interest rate swaps, and £381m for its role in Libor rigging. So for losing five billion quid and cheating on an industrial scale, Hester awarded his staff a quarter of a billion in bonuses. If you’ve ever wondered where Jeremy Hunt learned his black-belt brass-neck behaviour skills, look no further than the banking community.

Stephen Hester is an interesting man in some ways, just not many of them. One wonders if, in the light of strict new rules about converting drug-fuelled dosh into crisp, clean Sterling of the realm, he and his comrades might alter their behaviour? It’s possible, I suppose:

Sharp Sam the Bagman: Er, I wanna, yer know, deposit a few quid in your bank.

SGD: I see. Look here, this wouldn’t by any chance be money you wish to illegally launder would it?

SS: Oh no mate, nuffink like that. We just ‘ad a good year darn at Kray, Capone, Moriarty & Associates.

SGD: That’s a pity, only we have a special deal on laundered money for the next quarter. An extra half percent in interest.

SGD: Yes. And a further 0.1 percent bonus if you throw in some of your finest uncut Colombian for the chaps.

SS: Fackin ‘ell. It bears finkin’ abart does that.

Some of which brings me to Argentina’s Economy Minister Hernan Lorenzino, seen below leaving a New York appeals court which had just told him it was there “to enforce contracts, not rewrite them”, indicating that it could ultimately uphold a previous ruling instructing Argentina to pay all creditors in full. 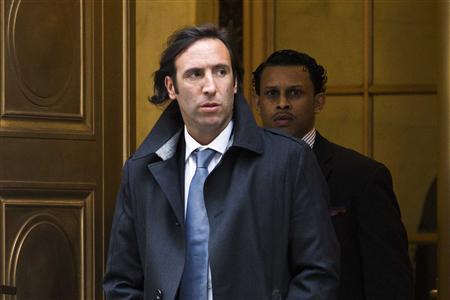 Reuters reported that, as a result of this threat, Argentine bond yields surged. But I am that man wondering if they surged because enough folks saw the above shot and thought ‘I wouldn’t buy a weather forecast in a heatwave from that guy, let alone any debt bonds’. I mean c’mon: he does look like a former convicted football match-fixer leaving a used car auction. (The bloke behind him, by the way, is Sharp Sam the Bagman, who just self-administered some of his own crop, and is now dealing with a severe case of retinal enlargement alongside tectonic eyebrow shift).

But it’s been quite a day for the money-laundering guys, who – it seems pretty clear to me – have displaced a Pope in their never-ending drive to keep hard-earned, hard drugs income safe from the grasping hands of mad Governments trying to fund unaffordable health provision for all. The Pontiff was thus airlifted out of the Vatican today, a move that put me in mind of Dick Nixon’s departure by helicopter from the White House in 1974. I doubt if Benedict XVI stepped aboard his helicopter and then gave a manic double-V for victory sign as he departed, but we must all hope anyway that his successor isn’t Gerald Ford II: the last thing we need right now is God’s Messenger on Earth falling off the Basilica balcony.

I’ve spent the day today with bankers, hence the need to be especially rude about them, whether central or provincial.