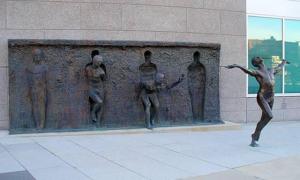 I just got through watching a documentary on the  birth and growth of the feminist movement in this country. It was invigorating to watch the energy and commitment that the people had back then despite the put down by the main stream media. As I watched I could feel a whole host of emotions bubbling up from within that needed to be heard.

The biggest was my discontent with the silence that has engulfed the country today. Our whole way of life is being destroyed, our constitution is being rewritten, our Bill Of Rights is being ignored, our freedom is being taken away little bits at a time and yet I can hear only silence! It is deafening and very troubling indeed. I think this maybe why people are drifting away from blog sites in large numbers. They sense something very wrong is going on in the world, but they are doing nothing about it and it isn’t sitting right with them. I could be totally wrong, but this is the sense I am getting from what is going on. I know for myself I am feeling the need to do something, say something, act on something to change the direction we are rapidly heading in and just being love is not doing it for me any longer. How many others are feeling this but are fearful of admitting it to themselves or to others?

While the women’s movement was incredibly important to the rights of all women and we have certainly come a long way since then, the importance of what is becoming of America at this time is not only criminal, but DIRE to the freedom of all people, and not just here in our country. As so many have written about for some time now, we are indeed in the end times and I have to ask what are we going to do about it? I no longer accept the excuse of fluoride dumbing us into submission. I think this problem goes far deeper. The core of this problem goes to a dumbing down of courage! Courage to stand up for ourselves and demand better. I think a lot of the fear mongering(knowingly or unknowingly) going on around the internet about how many millions of rounds of ammunition DHS has purchased or how many armored vehicles etc. as well as the show being put on by the police forces taking part in hand to hand combat exercises in our cities has less to do with readying themselves for battle with the American people and more to do with intimidation to stop things before they even go that far.

Intimidate people mercilessly over and over and eventually they will back off and shut up. It has worked for a while, but I am wondering just how many other people out there feel restless and somewhat guilty about doing nothing to stop this onslaught on the American people and our Constitutional rights. I think a great many people are feeling it but don’t know how to voice their feelings of frustration or don’t dare. There’s that fear coming up again! The women’s movement ended up publishing a very successful magazine called Ms. that brought like minds together at a time when they needed to understand what they were feeling. So where is our millionaire who wants to start publishing a magazine about these tumultuous times that will reconnect the bewildered people and set them in motion again with purpose to free ourselves?

Despite the fact we have the internet to connect the masses of the world, we are scattered. Why? Because I think the freedom of the internet while extraordinary and in many ways our life saver, also allows in the opposing forces to put forth a constant stream of intimidation to keep everyone in line. We need a platform to jump off from unhindered by the enemy. Lets face it, times are changing dramatically, people’s views on life are shifting and people are awakening. We need someone with deep pockets and most importantly backbone to create a magazine to spur change and aid in the birth of the new world centered around the freedom of the people to think, and be and act as they so desire. It’s time has come, we all know it, but what are we doing about it?

Blessings to us all,