The Pleiadians – Why Do You Have to Experience Something First to Heal It? – 27 March 2013

Many of you are asking on the inner planes, why can you just not go from one point to directly being healed? For example, why do you have to feel pain first for it then to clear? We wanted to speak to this today and bring in some understanding.

There are times when grace can come in, and simply clear something, but only usually after you have felt your experience for a while.  This is when you are given a divine dispensation.  But most of the time, it is to your benefit when you experience the fullness of your experience for it is in this you find the deeper understanding.

END_OF_DOCUMENT_TOKEN_TO_BE_REPLACED

Comments Off on The Pleiadians – Why Do You Have to Experience Something First to Heal It? – 27 March 2013

Uploaded on 10 October 2012 by David Hamilton Dr David Hamilton explaining that we have billions of miles of DNA throughout the 50-100 trillion cells in our bodies, enough to make several trips to the sun and back.

There’s much talk in spiritual circles about ‘setting our intention’; ‘envisioning the things we want’ or ‘manifesting our reality’. How easily such things slip into the psyche and collective vocabulary. What if though, we’re still being led astray by the ego, albeit a more subtle form of ego? What if instead, there is a reality that is shaping according to the natural flow of the universe? What if by aligning with that flow, you could amplify it and bring amazing harmony not just to your life, but the world around? I’m speaking of activating the Power of Higher Mind… END_OF_DOCUMENT_TOKEN_TO_BE_REPLACED

Recently, a paedophilia victims support group was raided by police, and evidence removed. This morning, Downing Street stands accused of restricting funds to help people sexually abused as children. The plan seems to be to starve the outers of the money they need to blow the whistle on a long-standing and appalling history of cover-up at the highest levels of government. END_OF_DOCUMENT_TOKEN_TO_BE_REPLACED

The Times : POPE Francis is to consider abolishing the Vatican Bank – which has been beset by a scandal over allegations of money-laundering – in a drive for greater transparency at the heart of the Catholic Church.

Archbishop Claudio Maria Celli, who has been tipped as a possible secretary of state, or “Vatican prime minister”, said Francis would weigh up appeals made by two cardinals on the eve of his election for the bank – formally known as the Institute for Works of Religion (IOR) – to be scrapped.

Posted on March 27, 2013 by lucas2012infos | Comments Off on NaturalNews – Michael Ravensthorpe – Lasagna Gardening : A Sustainable And No-Till Method Of Gardening – 27 March 2013 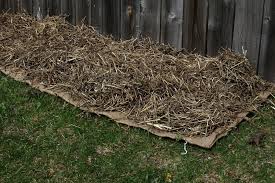 Lasagna gardening is a method of gardening that requires no tilling or weeding from the gardener, yet produces rich and fluffy soil. Also called ‘sheet composting,’ lasagna gardening involves building layers and layers of organic matter in a designated area of the garden, waiting until they compost, and then utilizing the fertile soil that is produced to grow plants. Aside from being convenient and physically undemanding, this type of gardening is beloved by gardeners because it is environmentally-friendly; rather than throwing your biodegradable waste into the trash, you’re using it to enrich your garden’s soil. END_OF_DOCUMENT_TOKEN_TO_BE_REPLACED

Comments Off on NaturalNews – Michael Ravensthorpe – Lasagna Gardening : A Sustainable And No-Till Method Of Gardening – 27 March 2013

Posted on March 27, 2013 by lucas2012infos | 1 comment
The BRICS Development Bank could become a World Bank in future due to the increasing influence of emerging countries: Goldman Sachs Asset Management.

BEIJING: The BRICS Development Bank could become a World Bank in future due to the increasing influence of emerging countries, chairman of Goldman Sachs Asset Management said on Wednesday.

“If, in fact, the BRICS bank is announced, this will be the beginning of an institution that sort of becomes a World Bank for their huge sphere of influence,” Jim O’Neill told state-run China Daily here.

BRICS, originally was named ‘BRIC’ by O’Neill in 2001 before the inclusion of South Africa in 2010.

The bank could be helpful in promoting BRICS (Brazil, Russia, India, China and South Africa) countries’ trade, he said, stressing that the new group’s economic achievements are much bigger than political.

With respect to economics, he said, BRICS countries – except South Africa -have become much bigger much more quickly than he expected, even if they have lost some momentum in the past 12 months.

He said the BRICS countries achievements were “remarkable” as their collective GDP in 2011 increased by around USD 2.3 trillion, which is equivalent to the size of Italy’s GDP.

“It is transforming everything in the world economy, including the patterns of world trade and finance,” he said.

O’Neill continues to put his confidence in emerging markets, remains bullish on China, and believes the country’s slowing 2012 growth will pick up in 2013.

“The importance and scale of China for the world, never mind within the BRICS group, is next to none and vital for us all,” he said.

As a result, he said, the decisions China makes – both in its own right and within a BRICS context – are extremely important.

“This decade, China will grow by around 7.5 per cent (annually) and I am happy with that,” O’Neill said.

He is also a bit surprised by the weakness of the retail sales numbers reported this year, which suggests that China needs to boost consumption, which might need more policy support.

Assuming the Chinese government does pull that off, O’Neill said it would mean China will succeed in doubling both real GDP and real incomes this decade as planned, and this would be good for the world.

Other BRICS countries, O’Neill said, need to concentrate on their own priorities rather than worry about China, as they also have things to achieve.

Posted on March 27, 2013 by lucas2012infos | Comments Off on AscensionPioneers – Transition in Relationships, Q&A And Seeking Balance In Diet – 27 March 2013

Comments Off on AscensionPioneers – Transition in Relationships, Q&A And Seeking Balance In Diet – 27 March 2013

Uploaded on 27 March 2013 by Suspicious0bservers END_OF_DOCUMENT_TOKEN_TO_BE_REPLACED