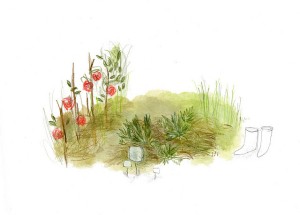 A SUMMER OF CONSPICUOUS PRODUCTION

A few years ago I rented an old farmhouse on a 200-acre organic dairy farm and moved there in the early spring. Showing me around the property, the farmer took me behind the house, pointed to a mound of aged cow manure at the edge of a 100’ x 200’ plot of naked soil and said, “And this is your garden.”

I laughed. What I knew about gardening wouldn’t fill a cucumber seed.

Born and bred on a Florida beach, and virtually clueless about what went into feeding humanity, I quickly read everything I could find about organic farming. I learned quite a bit about how to plant, but very little about how much. Gazing out on my plot of potential productivity, I decided growing food organically was a complicated, risky business; that most of what I planted would never reach the light of day, and even if it did, would probably succumb to slugs or bugs. For this reason I felt a strong compulsion to sow hundreds of seeds in the ground, to leave no clod unturned, so that by autumn I would at least have a few tomatoes to eat.

By July I had a growing suspicion I had overdone it. After a day of hoeing, weeding and hauling compost, I decided to get some exercise and see what my neighbors’ gardens looked like. I was naively smug to note mine was four times larger than everyone else’s. On the way home, I passed wild strawberries ripening in our farm’s fallow fields. This was quite a revelation since I had never seen “real” strawberries anywhere but in those little baskets in the supermarket. I looked around and there were thousands of them, so I felt compelled to pick them all and carry them home in little baskets. Then I felt compelled to preserve them and put them in little jars. Picking and processing took about a week and I ended up with oh, about sixty jars of jam, more or less.

By the end of that little escapade I was exhausted. What had come over me, I wondered? But my summer of putting up was far from petering out.

By now the garden had caught on, but I had not. While I hauled manure and erected a scarecrow, precocious green things kept popping up in my zucchini hills. I soon recognized these intruders as stalks of asparagus and enough garlic to supply a dozen Italian restaurants. But I felt compelled to let each and every intruder grow… and grow they did.

My summer of fecundity built to a climax toward early August when flocking martins pointed me to a massive hedge of thorny bushes lush with blackberries. I ate blackberry cobbler, blackberry pancakes, and finished up with 26 jars of preserves. When that affair was over, the previously unnoticed fencerow vines bloomed with luscious purple concords. After I got over being amazed I was crestfallen. How much jam can a person consume in a year?

But I was on a fruit and vegetable high I could not control. I lost count of the days and the number of jars in my jam cache and began reading up on the finer points of wine fermentation, while the zucchini grew as large as my thighs. Within about a two-week period I had more vegetables in my garden than I had consumed in my lifetime. I tried giving them away but my neighbors had grown only as much as they needed. Ah-ha.

You’d think at this point reality would set in, but not so. I blanched, processed, squeezed and mashed. I rendered tomatoes into paste, a process that was useful because it required bushels of tomatoes per pot. As the days wore on, a slave to my compulsion to let not a single vegetable or berry rot in the field, I shuffled from garden to kitchen to basement with nature’s bounty until the cows came home, literally, to assume their winter residence in the hay barn. I finally came to my senses the day I looked out my window and saw my bountiful kitchen garden dusted with a layer of soft snow.

Thankfully, I am now rehabilitated and can stand in the produce section of the grocery store, comfortable with the memory of the summer I went agriculturally berserk. I remind myself that while it is true what you sow so shall you reap, there is no compelling reason to harvest every lima bean, radish and carrot you plant. Hopefully the young couple who moved into that old farmhouse the following year felt compelled to sample the vintage wines and Epicurean treasures I left for them in the basement.