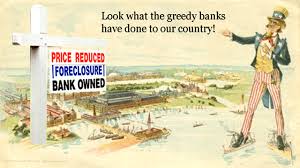 Could This be the Simple Formula That has Wrecked Two Civilizations, Going on Three?

If everyone asked the banks for their money tomorrow, only the first few would be successfully served. Cyprus? No. The US of A. And they’d use their one point seven billion hollow points to back it up…

The Case Against the Fed, Chapter 8, “Problems for the Fractional-Reserve Banker: Insolvency.” By Murray Rothbard. (Slightly edited for publication as a separate article – Tom Dennen)

Today’s banks are insolvent by definition and if customers lose confidence in their holdings and decide to cash out, it’s called a ‘run on the bank’ and the doors close.

If banks were legitimate businesses with ‘normal’ constraints, they would be legally liable to meet their contractual obligations, one of which is to ‘pay you, on demand’ your money.

A loss of confidence is always fatal because, by the very nature of fractional-reserve banking, no bank can honor all of its contracts.

A bank has two “customers”: people who make the initial deposit of cash and those who borrow the bank’s issue of warehouse receipts against its deposits or ‘reserves’.

The fractional-reserve process works because the law treats a deposit of cash in a bank as credit rather than a ‘bailment’ or a loan to the bank.

A deposit is a loan, and you expect a return of interest on it – it’s a transfer of custody, not ownership.

Assume that I set up a Rothbard Bank, which adheres strictly to a 100-percent reserve policy. Suppose that R20,000 is deposited in the bank. Then, abstracting from my capital and other assets of the bank, its balance sheet will look like this:

So long as Rothbard Bank receipts are treated by the market as equivalent to cash, and they function as such, the receipts will work as cash. So if Mr John Smith has deposited $3,000 at the Rothbard Bank, buys a painting from an art gallery and pays for it with his deposit receipt of $3,000, it’s valid.

The art gallery need not bother redeeming the receipt for cash, trusting its promised value.

So neither the cash itself nor the bank’s receipt for it circulates as money and as long as deposit banks adhere strictly to 100-percent reserve banking, there is also no increase in the money supply; only the form in which the money circulates changes. Thus, if there are R2 million of cash existing in a society, and people deposit $1.2 million in deposit banks, then the total of #2 million of money remains the same; the only difference is that $800,000 will continue to be cash, whereas the remaining R1.2 million will circulate as warehouse receipts to the cash, redeemable in cash.

Then the Rothbard Deposit Bank decides to create $15,000 in warehouse receipts, unbacked by cash, but redeemable on demand in cash, and lends them out with interest in various loans or purchases of securities. Now the Rothbard Bank’s balance sheet looks like this:

Suppose that the Rothbard Deposit Bank decides to make a quick killing and go all-out: upon a cash reserve of $20,000, decides to print unbacked warehouse receipts of $10,000,000, lending them out at interest to various borrowers?

Obviously an abuse of trust has occurred.

Have banks yielded to this temptation? Do they create warehouse receipts that exceed cash on hand, and lend these receipts out?

Yes. And the strictly separate functions of loan and deposit banking, of ownership and custody become muddled; the deposit trust is violated and the deposit contract cannot be fulfilled if all the “creditors” try to redeem their claims on the ‘extra’ warehouse receiptsat the same time, called a ‘run on the bank”.

That is fractional-reserve banking, a discovery made over three thousand years ago .

Every time it reared its head, it was crushed and its perpetrators exiled, as from Rome around AD 27 and from England in 1290 … or jailed as in Iceland last year, the only nation today with the courage to do so.

Once embarked upon, there is no reason – other than a run’s exposure of insolvency – not to increase the amount of receipts, but trust must remain intact for the system to work – and that only dissolves when the amount of fractional lending is exposed or gets out of hand as it has now… and not only in Cyprus, but all over the world.

Debt is not such a simple thing.

“IT CAN HAPPEN HERE” by Ellen Brown

Confiscating the customer deposits in Cyprus banks, it seems, was not a one-off, desperate idea of a few Eurozone “troika” officials scrambling to salvage their balance sheets. A joint paper by the US Federal Deposit Insurance Corporation and the Bank of England dated December 10, 2012, shows that these plans have been long in the making; that they originated with the G20 Financial Stability Board in Basel, Switzerland (discussed earlier here); and that the result will be to deliver clear title to the banks of depositor funds.

The National Government [is] pushing a Cyprus-style solution to bank failure in New Zealand which will see small depositors lose some of their savings to fund big bank bailouts . . . .

Open Bank Resolution (OBR) is Finance Minister Bill English’s favoured option dealing with a major bank failure. If a bank fails under OBR, all depositors will have their savings reduced overnight to fund the bank’s bail out.

Can They Do That?

Although few depositors realize it, legally the bank owns the depositor’s funds as soon as they are put in the bank. (Ownership rather than Custody – t.d.) Our money becomes the bank’s, and we become unsecured creditors holding IOUs or promises to pay. (See here and here.) But until now the bank has been obligated to pay the money back on demand in the form of cash. Under the FDIC-BOE plan, our IOUs will be converted into “bank equity.” The bank will get the money and we will get stock in the bank. With any luck we may be able to sell the stock to someone else, but when and at what price? Most people keep a deposit account so they can have ready cash to pay the bills.

The 15-page FDIC-BOE document is called “Resolving Globally Active, Systemically Important, Financial Institutions.” It begins by explaining that the 2008 banking crisis has made it clear that some other way besides taxpayer bailouts is needed to maintain “financial stability.” Evidently anticipating that the next financial collapse will be on a grander scale than either the taxpayers or Congress is willing to underwrite, the authors state:

An efficient path for returning the sound operations of the G-SIFI to the private sector would be provided by exchanging or converting a sufficient amount of the unsecured debt from the original creditors of the failed company [meaning the depositors] into equity [or stock]. In the U.S., the new equity would become capital in one or more newly formed operating entities. In the U.K., the same approach could be used, or the equity could be used to recapitalize the failing financial company itself—thus, the highest layer of surviving bailed-in creditors would become the owners of the resolved firm. In either country, the new equity holders would take on the corresponding risk of being shareholders in a financial institution.

No exception is indicated for “insured deposits” in the U.S., meaning those under $250,000, the deposits we thought were protected by FDIC insurance. This can hardly be an oversight, since it is the FDIC that is issuing the directive. The FDIC is an insurance company funded by premiums paid by private banks. The directive is called a “resolution process,” defined elsewhere as a plan that “would be triggered in the event of the failure of an insurer . . . .” The only mention of “insured deposits” is in connection with existing UK legislation, which the FDIC-BOE directive goes on to say is inadequate, implying that it needs to be modified or overridden.