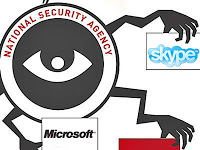 Skype set up a secret program to make it easier for US surveillance agencies to access customers’ information.

The program, called Project Chess and first revealed by the New York Times on Thursday, was said to have been established before Skype was bought by Microsoft in 2011. Microsoft’s links with US security are under intense scrutiny following the Guardian’s revelation of Prism, a surveillance program run by the National Security Agency (NSA), that claimed “direct” access to its servers and those of rivals including Apple, Facebook and Google.

Project Chess was set up to explore the legal and technical issues involved in making Skype’s communications more readily available to law enforcement and security officials, according to the Times. Only a handful of executives were aware of the plan. The company did not immediately return a call for comment.

Last year Skype denied reports that it had changed its software following the Microsoft acquisition in order to allow law enforcement easier access to communications. “Nothing could be more contrary to the Skype philosophy,” Mark Gillett, vice president of Microsoft’s Skype division, said in a blog post.

According to the Prism documents, Skype had been co-operating with the NSA’s scheme since February 2011, eight months before the software giant took it over. The document gives little detail on the technical nature of that cooperation. Microsoft declined to comment.

The news comes as the tech firms are attempting to distance themselves from the Prism revelations. All the firm’s listed as participating in the Prism scheme have denied that they give the NSA “direct” access to their servers, as claimed by the slide presentation, and said that they only comply with legal requests made through the courts.

Christopher Soghoian, a senior policy analyst studying technological surveillance at the American Civil Liberties Union, said the relationship between the tech giants and the NSA has a fundamental – and ironic – flaw that guarantees the Prism scandal is unlikely to be the last time tensions surface between the two.

The US spying apparatus and Silicon Valley’s top tech firms are basically in the same business, collecting information on people, he said. “It’s a weird symbiotic relationship. It’s not that Facebook and Google are trying to build a surveillance system but they effectively have,” he said. “If they wanted to, Google and Facebook could use technology to tackle the issue, anonymizing and deleting their customers’ information. But that information is how they make their money, so that is never going to happen.”
http://www.guardian.co.uk/technology/2013/jun/20/skype-nsa-access-user-data
http://www.nytimes.com/2013/06/20/technology/silicon-valley-and-spy-agency-bound-by-strengthening-web.html?hpw&_r=1&pagewanted=all&
http://www.slate.com/blogs/future_tense/2013/06/20/project_chess_report_says_skype_worked_on_secret_project_to_provide_chats.html