Posted on July 3, 2013 by lucas2012infos | Comments Off on WakingTimes – Christine Sarich – Quantum Microphone Picks Up Link Between Light And Sound – 3 July 2013 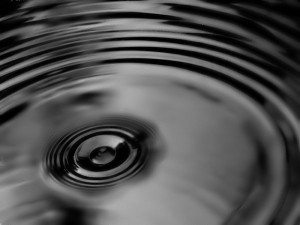 Recording the ‘music’ of the Universe just got a lot more interesting thanks to some scientists from Chalmers who have now demonstrated sound still exists even at the level of ‘quantum quietness.’ Like beat boxers and DJs spinning a record to make virtual sound in a microscopic recording studio, this new microphone allows some out-of-this-world music-making. Detecting sound at this level is akin to mixing the acoustic blues guitar of Corey Harris with the gut-wrenching electrical shredding of Jimi Hendrix – and it may help to illuminate phenomenon in quantum physics.

The research team studied acoustic waves with this ultra-sensitive microphone, which resemble ripples on the surface of a pond. The wavelength is a mere 3 micrometers, with the detector measuring in even smaller, and also capable of quickly sensing the acoustic waves as they travel across the microchip’s surface.

Utilizing nano-technology, scientists fabricated a three-millimeter-long echo chamber on the surface of the computer chip, and while the speed of sound on the crystalline surface is ten times higher than it is in air, the detector was able to show how sound pulses reflect back and forth, verifying the acoustic nature of quantum sound. The peaks and troughs of these sound waves are the height of a small percentage of a single proton diameter – so small in fact, that they are governed by quantum rather than classical mechanics. This is similar to how light behaves.

“The experiment is done on classical acoustic waves, but it shows that we have everything in place to begin studies of proper quantum-acoustics, and nobody has attempted that before”, says Martin Gustafsson, PhD student and one author of the article.

Apart from the extreme quietness, the pitch of the waves is too high for us to hear: The frequency of almost 1 gigahertz is 21 octaves above one-lined A. The new detector is the most sensitive in the world for such high-frequency sound.

Christina Sarich is a musician, yogi, humanitarian and freelance writer who channels many hours of studying Lao Tzu, Paramahansa Yogananda, Rob Brezny,  Miles Davis, and Tom Robbins into interesting tidbits to help you Wake up Your Sleepy Little Head, and See the Big Picture. Her blog is Yoga for the New World. Her latest book is Pharma Sutra: Healing the Body And Mind Through the Art of Yoga.

This article is offered under Creative Commons license. It’s okay to republish it anywhere as long as attribution bio is included and all links remain intact.  www.wakingtimes.com /link to original article