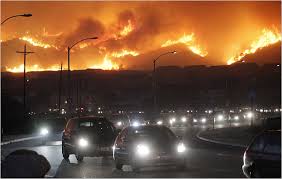 Brasscheck sent out a couple of videos concerning “wildfires”, and I couldn’t help but recall that for two years now there have been articles at the time of Colorado wildfires pointing out that the U.S. Forest Service refuses to use the Evergreen Air super tankers out of Phoenix to fight their fires.

I thought it was something to do with the fact that Evergreen Air does chemtrail spraying, that they’re a CIA asset, etc., but now a more concrete reason presents itself.

Is it possible that the reason they don’t use these super tankers is because they would be “too effective”? I have to consider it based on the following videos.

And if this is true, then those nineteen who died fighting the Yarnell Hill fire last weekend near Prescott, Arizona—eighteen of them an elite crew called the Hot Shots, trained to do exactly what they were doing—died unnecesarily.

We already know about the “planned obsolescence” of products, so this tactic by the government is not at all unlikely.

What do YOU think?

Nineteen Arizona fire fighters lost their lives in the biggest disaster for US firefighters since 2001.

Here’s the story you’re NOT being told.

If someone deliberately used inadequate equipment for a job when they knew better equipment was available and people died as a result, what would you call that?

Did you know that they don’t have wild fires in Russia like the ones we have in the US?

Why isn’t the US using this plane? They’ve known about it since 1994.

Deliberate ineptitude The Russian-designed Ilyusian IL76 Water-Bomber plane has the capacity to carry 16,000 gallons of water, able to put out a fire the size of 10 football fields lined up end to end, in fifteen seconds.This is over TWICE the biggest US plane used for the job and most planes used for wild fire fighting in the US are much, much smaller and drop chemicals, not water.

Another big payday for the oil and chemical companies – and the bureaucrats and Congressmen who get pay offs from them.

It was only four years ago, almost to the day that we experienced the Cedar fire, which at that time was one of the biggest fires in California history, after investigation it was proven to be Arson.Every year at this time the weather in Southern California becomes very dry and dangerous for fire.

You would think our government agencies would have learned something from it.

You would think that in four years… they would have figured out how to be prepared for this, but as you can see, the response has been totally inadequate. The numbers are staggering whether you are talking about money, homes, animals or the environment.

Did this tragedy have to happen? The answer is — No. The technology to put out these monstrous fires already exists, but “our government” refused to use it in 2003, because it was made in Russia. The Russians designed the Ilyusian IL76 Water-Bomber plane with the capacity to carry 16,000 gallons of water, able to put out a fire the size of 10 football fields lined up end to end, in fifteen seconds.

Why did we refuse it then? Did politics and historical animosity get in the way of saving our land, our animals, and our homes?

Why was it not called in for this fire?

These are questions that the citizens should be asking their Government representatives.