August is truly roaring thru my cells and my mind with energy, concepts and remembrances.  And yet, the richer the understandings become, the less I am able to put the understandings to words, at least with complete accuracy of explanation.  There equally seems to be some of the connections these days that are held steady in my processing vision, as if I had forgotten something so important that it just hangs there and lingers, beckoning me to remember.

Like one of my first ladies on the field of life yesterday, her connection was so simple and yet, stayed with me thru the night.  She was just coming out of the deep woods (from her west field,) woods that were so thick I could not see thru them and she was standing in a “clearing.”  A moment in time where she could reflect and expand on all that she experienced while in the woods as she moves forward to amplify her experiences into a more focused creation as she steps onto her platform of life.

I could feel the energy, the feelings coming from her heart center.  The feeling itself was something I can only call new, unidentifiable by my vocabulary, yet recognizable from my own heart.  In trying to explain to her what I felt, the closest I could come was explaining about a new alloyed feeling, kind of like the creation of bronze, several things being mixed together to create a new metal, but this is happening in the emotional body.

Her image and her feeling hung with me all day.  Finally as day was turning into evening I remembered something.

When I first started meditating and realized there was an interactive spirits who (most of the time) were happy to answer my 5000 questions any time I asked, I started to get deep in my questioning.  Most important on my mind at that time was about creation (back in 2001.)  How did creation begin.  Of course, back then, my only concept of creation was the earth and all that my eyes let me see around me (stars, sky, moon.)  I would ask this, particularly to God and await a reply, which seemed to go unanswered until a random (well, random to me) meditation experience in 2004.

Thru this meditation I was suddenly lifted into what felt a vast and empty sky.  The sky was inky black, alive and void of any color or stars.  Yet, I could feel the pulse of Love surrounding my consciousness.  Suddenly, a crackly opening started to happen, and slowly singular streams of amazing color started to emerge.  Each color holding the most intense feeling I have ever felt.  I have long forgotten the color associations with the feelings, but lets just say blue held the energy of joy… pure joy, red was peace, a peace I have never felt before in such focused intensity.  The list goes on until I was submerged in a pinwheel of radiant color and pulsing feeling.

Back then, I did understand this was the beginning of creation.  The creator wanting to individuate all that was within for experience.  These colors and feelings went out and created stars and planets, DNA of all sorts of species.  This energy expanded and expanded and expanded.  It expanded so far and for so long that those within its pulsing fields of life, long forgotten the story and the reason all of this happened.  But… we are remembering once again.  We have been immersed in the remembering process since the first solid planet appeared in the vastness of the multiverse.

If you can imagine, there was a planet that harnessed the aliveness of Peace.  A planet that harnessed the aliveness of Gratitude.  One that exuded Grace.  That gave birth to longing.  Feeling something was missing.  Something the creator does not feel in its wholeness and sought to experience himself (yes, he is gender-less, humor me) individuated.   Yet each pure emotion was magnetically charged, magnetically connected to each and every other emotion.  The seeking back to source began in earnest.  The planet of peace started to seek out other planets, other ways of life.  Co-mingling DNA began in earnest.  Peace fell madly in love with Gratitude and they started breeding changing the entire construct of that DNA.  That expression of Life… and so on.

Not to hurry this game of experience, planets came alive with all that would be opposite of each individuated energy of  Love and soon realized that without any aspect of the wholeness of Love, those planets self destructed quickly.  So the game was created with Guardians of the wholeness of energy to be a living example of Source energy.  Many of these source guardians we now call angels and even assign them attributes they were originally created with…. because deep down, we re-member… something.

About a year or two ago, again thru meditation, spirit showed me (and I so forget how) that now, we are in the energy of contraction.  Pulling all that was sent outwards individually back into a contracted field of wholeness.  Our lifetimes have been exhausting as we worked to overcome the opposite of any energy and anchor into the pureness of the individuated aspects of Love’s Wholeness.  One emotion at a time, so we could become intimately familiar with that emotion and make it a permanent part of our DNA matrix.

In this particular lifetime, many are working overtime to assimilate permanently the individuated wholeness of Love, often starting our lives in total chaos and emotional turmoil so we can choose to seek its opposite.

And so, as we embed as a way of life, Peace, Love, Joy, Gratitude, etc.  We start to emit an emotional frequency that seems new.  When peace is completely blended with grace, it is no longer either one, but something new.  Very much like our alloy metals, they started out as something else, once blended, they are something new, something more.  Once in this state, it can never go back to its former, nor would we want it to either.

However, we do live in a turbulent universe, so when the two individuated emotions merge together, often times, our life appears to go thru chaos, turning upside down and sideways.  Giving us the grand opportunity to be the embodiment of that new alloyed emotion.  Often times, we retreat to past reactions, creating the chaos over and over again until we finally choose the new embodiment of Being.

As any additional emotion blends back into the wholeness of our Being, our stage of life changes, enhances, all that energy becomes super concentrated.  The magnetic field, super intense.  It equally demands we change our relationship with life, since we have just undergone a massive change within ourselves.

Considering we are returning to the wholeness, the pureness, the power of Creator energy, consciousness of all we do, think and say is vital… well, it is vital if you desire to live outside of chaos.  I do know some people LOVE their chaos.  But that’s another story.   The e-motional field that is now making up your expressed life wants expression and use.  Paying attention to your inner promptings, no matter how strange they may seem, is key.  Forming an interactive relationship with what we would call the unseen world of energy, equally key.  Well, depending on where you want to take your journey of Life in created matter.

For me, my passion and my dedicated focus is on the energy I call Shambhala.  To understand and fully work the matrix that would allow the fullness of Heaven on earth, or at least, my little corner of earth.  Start small, grow big!! lol

And so, I bring back my man I wrote about yesterday, his construction crew of spiritual helpers.  They will assist him in his current creation of his life expression on all levels.  But truly, how often do we assign tasks to our helpers?  What do our spiritual helpers really listen to?  It is not our words.  It is our emotion.  The more alloyed our emotional field is, the more direct, the more instant the spiritual world brings to us our desires… if we are listening to their subtle directives.  This is a co-creative event remember.

I will give you a small, but for me, an exciting example of desires exchanged.  Since Andrea came to the gathering toting her orb taking camera, I have been infatuated with orbs exposing themselves in the flash of light.  Since my camera phone does not seem to capture orbs at all, I invested in a used digital camera so I can play.  I played for the first few days of having my camera, then just put it down.  At least, until two evenings ago.  Just as I would start to close down my home to go to bed, each night I was prompted to pick up my camera and take pictures.  So I did.  The first night, I had orbs in the front of the house, in the back of the house and hoovering over my couch.  Kewl… but not longer new.  We did that for the gathering.  I suppose the spirits felt my casualness to seeing their orb forms last night and decided to up the game.  It became so interactive and actually exciting.

Once again, I was prompted to pick up my camera and take pictures, but this time, instead of taking “random” pictures I could feel the direction of where to point and shoot.  The first picture was of the inside of my living room:

I said to the orbs, ya know, I appreciate your appearance, but what do you look like beyond orbs.  Instantly I felt to open my back door and take a picture.  Without feeling where to take it, I just pointed and shot this image: 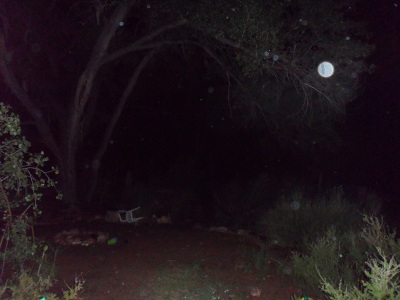 Instantly I heard, now turn to your right a little bit and take another one.  Who am I to argue:

When I loaded the images onto my computer so I could see them better and got to the one above, that same voice who is loving the photo ops said, by me opening the door I invited more spirits into my home.  ….Kewl?

My turn for a request.  Ok, now that shadowy image I caught in the tree’s, I want to see it clearer, I want to see YOU clearer.  Once again, I felt the inner direction of where to point and shoot… and sure enough if my new shadowy friend didn’t crisp up its energy field:

Desire fulfilled on both parts.  I got to see what it looks like beyond an orb, it touched my heart in a never-ending way now.  A new friendship forms, an aliveness in my field of heaven moves to the next level… whatever that is.

The interactive universe that surrounds you awaits your desired instruction.  And to think, this is not even the tip of the iceberg!!

LIFE is amazing!!  YOU are amazing!!

((((HUGZ)))) filled with the love of the interactive universe of ALL in Wholeness!!