Quite a day for Obama: how he double-crossed the American people, and nailed a good citizen to the cross

Yesterday’s news about the ‘upgrading’ of the fall-out from the Japanese Fukushima reactor was rapidly followed by the receipt of a timely dossier by The Slog. There’s nothing secret about it, you can read it in full here and while I’m not familiar with the site, 95% of it is based on FOI demanded information in the US, with Xeroxed extracts to prove the points being made.

The thrust of the piece is that, from the first day onwards, the US government has massively underplayed the the scale of the disaster – and its effect in particular on North America itself. In the text of stenography, there are repeated references to “play down the level of fallout”, “our line should be there’s no cause for alarm” and so forth.

But the bottom line is that somewhere in the region of 1.3 million Americans will be dead as a direct cause of Fukushima by 2030.

There is also clear evidence – I would say, irrefutable evidence – that the Japanese have run out of ideas as to how the meltdown process might be stopped, and that in complete contrast to official announcements, very little at Fukushima is “contained”. The likelihood is further melting down is still in progress. This was partly supported by yesterday’s “update”, in which the Tokyo Electric Power Company (Tepco) said a leak of at least 300 tonnes of the highly radioactive water was discovered on Monday. But the game is still on to toe the “no cause for alarm” line: officials described the leak as a level-one incident – the lowest level – on the International Nuclear and Radiological Event Scale (Ines). Based on the dossier linked to above, I would suggest that this is almost certainly bollocks. (Apart from anything else, the first release said the level of danger had been raised: so how can it still be at “the lowest level”? Webs, weave, deceive etc etc).

The BBC is as expected completely onside with the “nothing to see here” approach: its Environment page online claims, “the scale of the overall radiation leakage at Fukushima must be kept in some perspective. According to Dr Ken Buesseler, a senior scientist at the Woods Hole Oceanographic Institute, the total amount of the radioactive element caesium produced since the disaster began at Fukushima is roughly equal to the amount that has been emitted at Windscale/Sellafield since operations began there 60 years ago.”

A complete weasel: caesium is just one element in a radioactive plume disaster. Try this extract from the dossier, March 13th 2011:

And this, from later the same year: 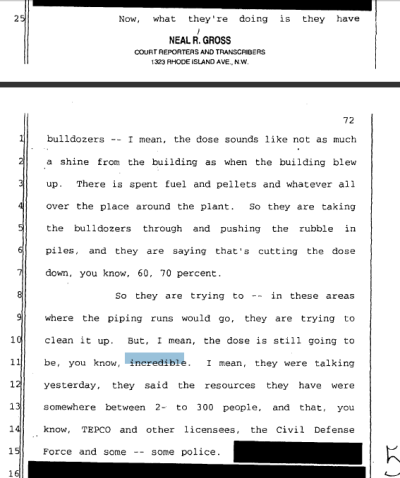 Or this in the light of the BBC’s claim that “nobody has yet been reported as dead” as a result of the disaster:

This bit, however, was the part that truly turned even my iron-clad cynical stomach as an example of the US élite’s “prorities”: in this first extract, it’s clear that Obama knows the truth, and is keen to cover it up….as are the bureaucrats:

And in this latter fragment, the President’s main concern seems to be his popularity in two western States: 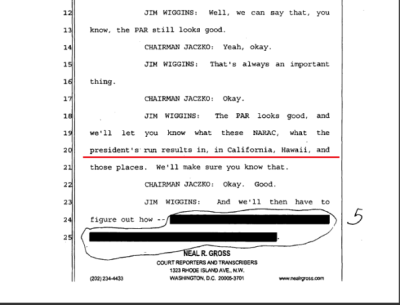 One is, of course, left wondering what Mr Wiggins had yet to figure out…explaining away all the dead folks?

So what if anything has this latest example of sociopathy at high government levels got in common with the Bradley Manning case? Just this: both show that those allegedly in charge have not the remotest intention of either nurturing or protecting their citizens and their values. Manning has been given 35 years for blowing the whistle on profoundly unethical foreign policy and military practices by the US. What does that tell us about the American Justice system’s ability to give Americans a fair trial and equality before the law?

The guy broke a promise, an Oath. Big deal: his Government broke at least seven International laws on an industrial scale. And for revealing this, a liberal democracy led by a black Democrat President has put this fundamentally decent man behind bars for 35 years. This was his letter to Obama pleading for a pardon:

‘The decisions that I made in 2010 were made out of a concern for my country and the world that we live in. Since the tragic events of 9/11, our country has been at war. We’ve been at war with an enemy that chooses not to meet us on any traditional battlefield, and due to this fact we’ve had to alter our methods of combating the risks posed to us and our way of life.

I initially agreed with these methods and chose to volunteer to help defend my country. It was not until I was in Iraq and reading secret military reports on a daily basis that I started to question the morality of what we were doing. It was at this time I realized that (in) our efforts to meet the risk posed to us by the enemy, we have forgotten our humanity. We consciously elected to devalue human life both in Iraq and Afghanistan. When we engaged those that we perceived were the enemy, we sometimes killed innocent civilians. Whenever we killed innocent civilians, instead of accepting responsibility for our conduct, we elected to hide behind the veil of national security and classified information in order to avoid any public accountability.

In our zeal to kill the enemy, we internally debated the definition of torture. We held individuals at Guantanamo for years without due process. We inexplicably turned a blind eye to torture and executions by the Iraqi government. And we stomached countless other acts in the name of our war on terror.

Patriotism is often the cry extolled when morally questionable acts are advocated by those in power. When these cries of patriotism drown out any logically based dissension, it is usually the American soldier that is given the order to carry out some ill-conceived mission.

Our nation has had similar dark moments for the virtues of democracy — the Trail of Tears, the Dred Scott decision, McCarthyism, and the Japanese-American internment camps — to mention a few. I am confident that many of the actions since 9/11 will one day be viewed in a similar light.

As the late Howard Zinn once said, “There is not a flag large enough to cover the shame of killing innocent people.”

I understand that my actions violated the law; I regret if my actions hurt anyone or harmed the United States. It was never my intent to hurt anyone. I only wanted to help people. When I chose to disclose classified information, I did so out of a love for my country and a sense of duty to others.

If you deny my request for a pardon, I will serve my time knowing that sometimes you have to pay a heavy price to live in a free society. I will gladly pay that price if it means we could have a country that is truly conceived in liberty and dedicated to the proposition that all women and men are created equal.’

Well I don’t know about you, but I’m moved by that simple and entirely laudable expression of intent. But it wasn’t enough to mollify CBS – “The Army private was given a much lower prison sentence than what was allowable based on his convictions” – or indeed the increasingly visceral Hannanite UK media-wolf pack:

‘He was a ‘mess of a child’ who was tormented for being gay, kicked out of home at 18 by his father and once threatened to stab his step mother with a knife. His own mother drank too much, he could not hold down a job and once literally crawled up a wall because he felt his family were ignoring him.Perhaps it was no surprise then, that Bradley Manning was angry at the world – angry enough to hit back at any figure of authority that was within his grasp. He has now been convicted of leaking classified information but given the troubled life he led Manning was always a time bomb waiting to go off.’

Much as I am the last person on Earth to be pc about anything, the Daily Mail totally surpassed itself with this foul slur aimed at anyone who’s mum drank, or is gay, or was bullied at school. It is an insult to all the millions of people round the world who fit one or more of those stereotypes. But chiefly, it is braindead tabloid morality at its worst.

My take would be that despite those awful familial influences, Bradley Manning triumphed over them to do the right thing. But that’s probably just me being a fluffy Leftie, or something. Or an incurable optimist.

Like Loading...
This entry was posted in Article, Links, reblog and tagged 2013, 22 August, Disclosure, Earth, Fukushima & Manning : Why The Two Are Part Of The Same Syndrome, John Ward, news, spiritual, Spiritual evolution, World. Bookmark the permalink.