Posted on November 19, 2013 by lucas2012infos | Comments Off on Bernanke Sticks To Strategy, But Opts For U-turn Lincoln Beardlift Reverse Clock Tactic – 19 November 2013 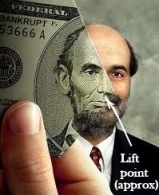 In a move clearly designed to steady market nerves this afternoon, US Fed Chairman Osama Ben Debtladen is expected to tell a Washington press conference that he intends to regulate all clocks going forward. From tomorrow at 4.00 am EST, all clocks will go backwards when a decision needs to be taken. “The problem currency dealers and central bankers face,” said Mr Burndollar, “is that with gold upside down, bond yields going down, and the currency watered down, they have been asking me to stop any chance of alternatives beyond their control from growing up in the future. I think that, on balance, this new Zero Instant Rates Passage (ZIRP) approach to the problem will remove any real and present danger by ensuring an ever-present present. Well, that and my fabulous new beardlift”.

UK-side Pondwise, in his never-ending fight to pay back £2.4 trillion of debt not including Off Balance-Sheet, Chancellor George Ostrich today announced that he is to introduce CGT as an annual tax on all houses. “The flaw in the current system,” Mr Osprey explained, “Is that homeowners only declare their gain when they sell a property, and when they do, we don’t tax them at all. My new scheme closes both those loopholes. I am also – in the light of recent criticism – considering a tax on negative equity, in order to discourage too much participation in the Help to Buy scheme and thus stabilise the housing market. This just goes to show yet again that Conservatives listen to what people want, but only do something when The Times, Telegraph and Mail have an epi about it”.

Prime Minister Avid Cameldung is to advocate the strangling of all children at birth, a meeting of the Monday Club Odessa Group was told yesterday. The PM’s special media guru Randy Coolsperm told Club members, “The PM believes the only way we can address the paedophile problem is to stop people asking what he’s doing about it, and so he has decided to ruthlessly crack down on births, and thus cut off the supply of flesh to these perverts. As some of them are his close friends and colleagues, Mr Camembert is once again showing that, even though he is a big cheese, crony capitalism is not in his lexicon”. A Mrs Leonora Britpack of Amsterdam committed suicide on the news. Google and Microsoft were both up 5%.

Shadow Chancellor Teddy Testicles is under pressure to pay back the £50,000 donation he accepted from Len Wardle since the Drugs Hell of Coop ethical standards Chair Mr Paul Flowerpower came to light. Writing in the Maily Torygraph last night, tough-talking columnist Benedictine O’Brogue insisted that this was ‘the only way for Mr Ricicles to compensate Coop bondholders for their £4billion losses, while confirming his faith in new Hedge Fund owners Carrion Roadkill and Boacon Strictarse’. Mr O’Brogue also advised his readers that the best way to stem Labour’s ‘inexplicable popularity’ was to introduce a tax on voting any way other than Conservative. Testicles, the MP for Mauly, said he was unable to comment due to a life-threatening stammer condition.

The Daily Mail shot itself in the head this morning, but no harm was done. Later however the gun went off again, shooting four subeds in the foot. All of the victims are in intensive care suffering from serious brain damage. The loose foot shot was the result of a dangerously cocked journo who posted that the Nurse found guilty of leaving a baby face down in the stationery cupboard had been traumatised by a short history of being groped in her hotel room by David Rawson, 25, after he’d seen Kim Kardashian showing off major cleavage as she attended the new Mario Testino exhibit in New York following the startling news that there was no romance for Dec Donnelly’s sidekick Ant McPartlin, who celebrated his 38th birthday on Monday. One witness to the accident said, “I’ve always thought the Mail was a load of cock, but on this occasion a cocked hack is being knocked by everyone else. This may well be a record”.