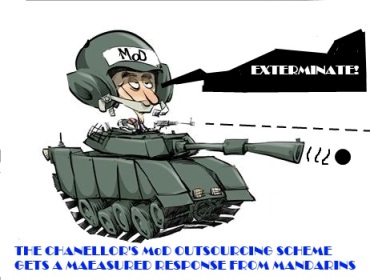 Some of you may recall me going on about George Osborne’s secret and very personal battle with the self-centred, embezzling Sir Humphreys at the Ministry of Defence (MoD). The last time I blogged about this topic, Nobsore had decided to get rid of them by outsourcing military procurement to the private sector.

But to kill a Sir Humphrey, you need the full set of silver bullets, heart-stakes and lead-lined coffins. Now comes the news today that the MoD has shelved (aka binned) George’s plan to privatise procurement. The problem was that all but one of the potential suppliers pulled out because (I’m told) they smelt a large number of rats.

You can see why they would: for example, the CH2M Hill/Serco/Atkins consortium didn’t go ahead – according to sources – because they thought the MoD Sir Humphreys’ accounting was bogus. Earlier this year, the MoDs declared a balanced budget, but this turned out to be, um, a big fat fib: some months afterwards, Defence Secretary Philip Hammond discovered that the aircraft carriers budget was £800m over budget.

This is a smart ruse by the Pinstripes: if you’re accused of being fat, incompetent, incapable of control and incorrigibly mendacious, simply behave like that, and suppliers will run a mile. The strategy is what one might call protection through projection.
The entire senior Civil Service – especially Defence, Foreign Affairs, Treasury, the Home Office and Health – is full of weasels, crooks and troughers who (like so many other privileged groups) cheat and screw up 24/7. Bankers, Accountants, Lawyers, Media owners, MPs, Unions, spooks and senior coppers: they’re all above the law, because they all have the power to blackmail the politicians. And many of them bankroll the politicians.
But none of whom I’m aware cheat the citizen and feather the nest with quite the arrogant calm of the Whitehall mandarins. And none of the Mandarins deserve to be fired and stripped of their pensions more than the MoDs, whose failures in the past have, without any doubt, killed thousands of soldiers.
As usual, it all comes down to power: if you want to know where the power resides, simple watch who wins. In any culture, power has the capacity to compromise merit. In Britain, it has destroyed the meritocracy by administering a deadly potion of affirmative action, public school bureaucratic amateurism, and networking.
Connected from the archives: Sir Jeremy Himmler and the cost of the Cabinet Office
www.hat4uk.wordpress.com /link to original article
Advertisement