Dave goes for the UKip vote, shoots self in head 47 times

The Quarter 4 European Economic and Financial Report is out, and it might as well have been headed “Vote UKip”.

New Italian bank credit losses of €42 billion
I’d imagine that Dave and Nick are jolly glad about all these positive UK economic statistics to distract everyone’s attention from other small matters like the entire BBC being fitted up while kids continue to be buggered up and down the land. And I bet they heaved a particular sigh of relief when the EUnatics’ Q4 2013 Outlook report came out and slid gently into the middle pages of wonk magazines. So I’m delighted to deliver the gist of this document to a wider audience now. Your job Audience, should you choose to accept it, is to get it seen by everyone from Farage to Gove and all points inbetween with a swarm of viral tweeting, texting and reblogging the likes of which have never been seen before.Even the Director General of this bit of the EC Signor Bacon Butti struggled to make the document seem upbeat in his foreword: 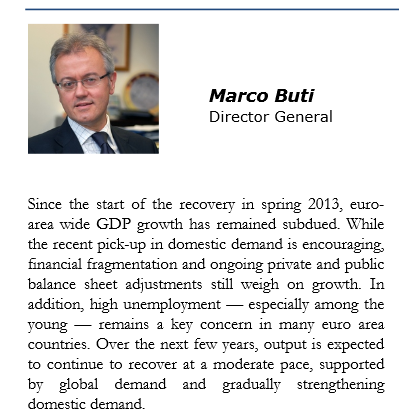 I particularly liked “since the start of the recovery in spring 2013″ – the data supporting which were Italian, and three months later proved to be absolutely false. But going through the rest of the report (which clearly, Signor Butti didn’t write) those further down the food chain get to give their somewhat more straightforward version of reality: 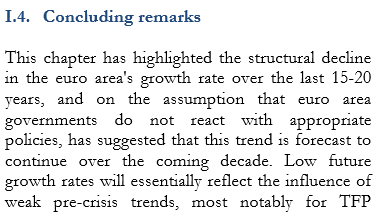 Oh dear. Weak pre-crisis trends. Structural decline. Euro governments won’t react. Forecast to continue. Not only did Signor Butti not write this stuff, he almost certainly didn’t even read it. And it gets worse at the final stroke:

Blimey. Er, right-ho. Hmm. And let’s see George Osborne, your proposal is that we heavy-hitting Brits endowed with so much influence wade in their and persuade the other 26 to sort themselves out, right? Well Nobsore, looks to me like the batsman’s Holding the bowler’s Willy re this one.

Stil, nihil desperandum there in the Yes-Camp, the ClubMed debt bonds are turning round a treat, why – I read only the other day that everyone from Abe to ZZTopp is piling in there. Although on the other hand, maybe they have other reasons. In the light of this though, they might not stick around:

‘…Italian banks will need to set aside as much as 42 billion euros ($57 billion) in new provisions for credit losses by the end of 2014 and some may have to raise additional capital, rating agency Standard & Poor’s said on Tuesday.

It said a full recovery for the sector, which was badly hit by the euro zone debt crisis and is struggling with rising bad debts, remained a long way off because of Italy’s weak economic prospects and continued deterioration in asset quality. S&P expects the stock of bad loans at Italian banks to rise to 310 billion-320 billion euros by the end of this year, or about 18 percent of customer loans.That will force the lenders to set aside an additional 32 billion-42 billion euros to cover for credit losses between June 2013 and December 2014, according to the agency’s estimates…..’
Rrrrright. Er, Grant? Just nip round the Beeb and arrest another DJ will you? Thanks awfully. I thought this time maybe, um, JImmy Young. What? Nooo, he’s not dead. Ninety-two and ga-ga. Perfect. Get Boris and the Met on to it can you, there’s a good chap….
Hat tips to Roy, Butch and Mish for being the eyes on this ball.
www.hat4uk.wordpress.com / link to original article