Yes, I’ve been saying this about Snowden — that people should read the book, “The Key: How to Write Damn Good Fiction Using the Power of Myth.”

As an English Major, it’s so obvious it hurts. Americans have become so myth illiterate, so out of touch with soul that they fall for any advertising or news story that even hints at deeper meaning. Of course, the meanings are all contrived and disempowering, but hey, there’s a hero, a chase scene and a Guardian. The emaciated soul cries out for more GMO high fructose corn syrup “heroes with a thousand faces.”

Thanks to Zen Gardner for bringing this article to my attention. I was aware of the Catch 22 references, but Kevin Barrett gives a nice explication. For your reference, I include Merriam-Webster’s definition of “catch 22″:

: a problematic situation for which the only solution is denied by a circumstance inherent in the problem or by a rule ; also : the circumstance or rule that denies a solution
2
a : an illogical, unreasonable, or senseless situation
b : a measure or policy whose effect is the opposite of what was intended
c : a situation presenting two equally undesirable alternatives
3
: a hidden difficulty or means of entrapment : catch

**** They are programming people to give up, to accept the police state.

Hmmmm, where have we heard that line before?

What is “Snowden’s secret?”
by Kevin Barrett, VT Editor, with Press TV 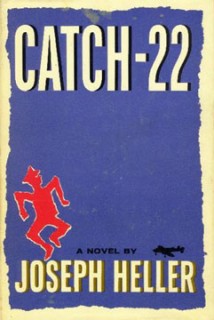 Yet today, as a real-life Snowden leaks secrets right and left, the media has failed to notice that we’ve heard the phrase “Snowden’s secret” before. Incredible as it seems, “Snowden’s secret” is the culminating revelation of one of the masterpieces of American literature: Joseph Heller’s novel Catch-22, first published in 1961.

Catch22It’s almost as if the deep background to “Snowden’s secret” is being kept secret.

Catch-22 was the greatest antiwar novel of the 1960s – a darkly hilarious marriage of the sensibilities of Mark Twain and Louis-Ferdinand Céline. The story follows the adventures of Yossarian, an American bombardier nearly driven mad by the horrors of World War II and the military-industrial-intelligence bureaucracy.

The themes and events of the novel are tied together by oblique references to “Snowden’s secret.” The brooding, half-crazy Yossarian carries Snowden’s awful secret around in his breast, but it isn’t until the end of the novel that the reader learns what it is. It turns out that Snowden was a member of Yossarian’s bomber crew who was killed in action by shrapnel. Snowden died a terrible death in Yossarian’s arms, his entrails spilling horribly out of his belly.

Pondering “Snowden’s secret” inspires Yossarian to act heroically – by deserting from the US military and thereby refusing to betray his friends to an insane, out-of-control bureaucracy. Yossarian’s courageous act of desertion, inspired by the spilled guts of Snowden, ends the novel on an upbeat note of endless possibility.

Half a century after the publication of Catch-22, a real-life Snowden heroically deserts from the US military (NSA branch), refuses to betray his fellow citizens to an insane, out-of-control bureaucracy, and “spills his guts” to the media. Only this time, there isn’t just one “Snowden’s secret” – there are thousands!

Is this merely a case of life imitating art?

Jimmy Walter, the visionary philanthropist who was driven out of the United States for supporting the 9/11 truth movement, doesn’t believe in coincidences. Like Naomi Wolf, Kevin Ryan, and Webster Tarpley, Walter suspects that “Operation Snowden” may be some sort of inside job.

“Snowden’s death embodies Yossarian’s desire to evade death; by seeing Snowden’s entrails spilling over the plane, he feels that ‘Man was matter, that was Snowden’s secret. Drop him out a window and he’ll fall. Set fire to him and he’ll burn. Bury him and he’ll rot, like other kinds of garbage. The spirit gone, man is garbage.’ The experience on the plane dramatically changes Yossarian’s attitude towards life. He looks only to protect his own life and, to a lesser extent, the lives of his close friends. So the real point of Snowden today is the same as the novel: make people accept that the government is all knowing, all powerful and that it is useless to resist; that is our Snowden’s only victory. If the government continues to do as it always has, who will know? Who will dare tell? Who will give up their family, wealth, life as they now know it to accomplish nothing?”

Naomi Wolf offers a parallel interpretation: “It is actually in the Police State’s interest to let everyone know that everything you write or say everywhere is being surveilled, and that awful things happen to people who challenge this.”

9/11 whistleblower Kevin Ryan – who exposed the cover-up of the controlled demolition of the three World Trade Center skyscrapers, was unjustly fired from his job, fought back, yet was completely blacked out of the mainstream media – is understandably suspicious of media darling Edward Snowden: “Presenting documents at a measured rate could be a way to acclimate citizens to painful realities without stirring the public into a panic or a unified response that might actually threaten the status quo. And considering that the number of documents has somehow grown from only thousands to nearly two million, the few insiders could release practically anything, thereby controlling national dialogue on many topics.”

Historian Webster Tarpley points out: “The most obvious characteristic of the limited hangout operative is that he or she immediately becomes the darling of the controlled corporate media… Limited hangouts reveal nothing about big issues like JFK and 9/11.”

In fact, limited hangouts are designed to distract attention from the big issues – and prevent real change.

If, in 1963, the American people had learned that CIA agent George H.W. Bush supervised one of the six shooter-teams that murdered President Kennedy, what would have happened? Bush himself provided the answer to journalist Sara McClendon: “Sarah, if the American people ever find out what we have done, they will chase us down the streets and lynch us.”

If, in 2001, the American people had learned that Vice President Dick Cheney and other top US officials had conspired with Israel to murder almost 3,000 Americans in a false-flag attack on America, even more lynchings would have ensued – and official US policy would have been drastically changed for the better.

If the American people learned that massive, illegal NSA spying on Americans began in March, 2001, and was intended to collect blackmail material on anyone of significance who might oppose the coming 9/11 coup d’état, they would lynch their leaders, destroy their National Security State and exercise their God-given right expressed in the Declaration of Independence: “That whenever any Form of Government becomes destructive of these ends, it is the Right of the People to alter or to abolish it, and to institute new Government.”

Michael Scheuer, former head of the CIA’s Bin Laden unit, recently suggested that as the American and British people begin to understand the real nature of the tyranny that has engulfed them, someone is likely to step forward and assassinate top US and British leaders – and be hailed as a hero.

But to rise up and overthrow tyranny requires courage. Specifically, it requires the courage to be willing to die in a just cause.

This “secret” can be understood in two ways. One way, the secularist-atheist way, goes like this: “Since the illusions of religion have dissipated, the spirit is gone, and we know this rotten physical life is all there is and death is the end, we should be cowed into submission when our evil rulers threaten to kill us if we rebel.” Snowden skeptics like Jimmy Walter think this is the message the New World Order’s “Operation Snowden” is broadcasting to the American people and the people of the world.

For all I know, Jimmy may be right. That is certainly the New World Order’s message, Snowden or no Snowden. But I prefer to interpret “Snowden’s secret” differently.

As I see it, if the spirit is gone, man IS garbage. It is the spiritual dimension of existence that makes us human and gives us the courage to risk death by fighting back against oppressors.

Edward Snowden may be a saintly man who is risking death to fight oppression. Or maybe not.

But either way, the New World Order tyranny descending on the world – as Edward Snowden once suggested – is not worth living under. We must reclaim the spirit, rediscover our humanity, overcome our fear of death, and risk everything in an all-out effort to overthrow the demonic forces of incipient global tyranny.

THAT is Snowden’s REAL secret. Please pass it on.