The official results are in. Spain missed its budget deficit target considerably by reasonable reporting, barely by another.

The budget goal was far less ambitious than previous, but still did not met the commitment to Brussels. The Government has published today the first official public deficit figure for the end of 2013, there will be new reviews in the coming months and a year, but Spain has deviated from the intended target.

Specifically, the government recorded a hole of 6.62% of GDP in 2013 (67.755 billion euros), one tenth of a percentage point above the limit of 6.5% agreed with the European Commission, according to Finance Minister Cristobal Montoro, in a press conference after the Council of Ministers. However, the announced figure does not include the cost of financial aid reported last year (0.46%), so that the actual deficit stood at 7.08% of GDP.

So Much Pain for Virtually No Reward

Via translation from Guru’s blog, paraphrasing a bit because of a difficult translation, please consider So Much Pain for Virtually No Reward, Fire the CEO.

Happy and content as a lark, Montoro proudly announcing that Spain “almost” met the deficit target.

The Spanish public deficit closed at 6.62% of GDP in 2013, slightly more than a tenth above the target of 6.5% agreed with the European Commission (well the first we agreed if I remember correctly was 4.5%) 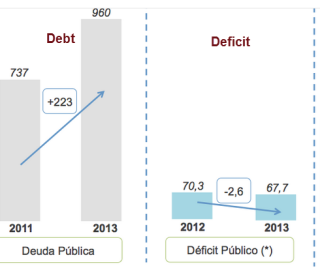 Are you telling me that this is all we get for so much pain? Well, boys and girls, something has gone badly wrong.

I can tell you this: If I focus on the cold numbers, the deficit fell only 2 billion euros with a gap of almost 68 billion (excluding aid to banks). Please fired the CEO of this company.