It is a little known fact that I have a Faery Garden Landscaper who goes by the alias “Heather,” but is in truth far more like Mary Poppins. She’s “practically perfect in every way,” extremely fastidious (which is as hilarious in our wild yard as in the Banks’ crazy household), and, I must say, quite the “spit spot,” pursed lips slave driver! She has great ideas, but I actually sent her on a two week vacation so that I could get caught up. Catching up has meant acquiring and installing a soaker hose system, which still needs mulching over: 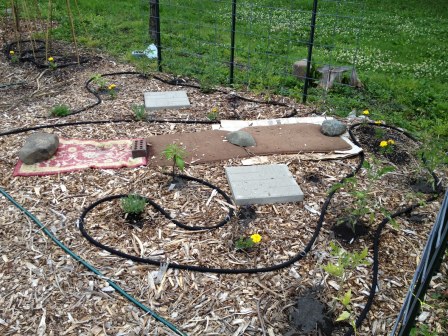 … as well as various soil amendments for the first year wood mulched areas, whose wood chips are robbing nitrogen from my plants, not yet having broken down enough to provide nutrients. These amendments include: 30 pounds of worm castings, 1/2 a packet of Sea90, a giant bag of volcanic ash, and 1/3 of the Elemite rock dust I ordered. Last evening I was further reminded of Mary Poppins — or rather, her chimney sweep friend, Bert, when I happened to glance in the mirror after spreading volcanic ash: 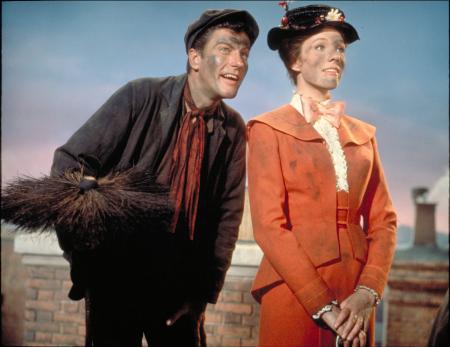 Anyway, “Heather,” other Faeries and/or the Land itself have been thanking me for the soil amendments. Three times in a row, I finished applying whatever I added, only to have it begin raining within minutes of my going inside. Soft rain washed the vermicompost and various powders into the soil, and I can already see the difference in plant growth and color. Prior to adding all these goodies, the plants in the front mulched and urbanite areas were only 1/3 the size of their Garden Tower counterparts, which are growing better than anything else: 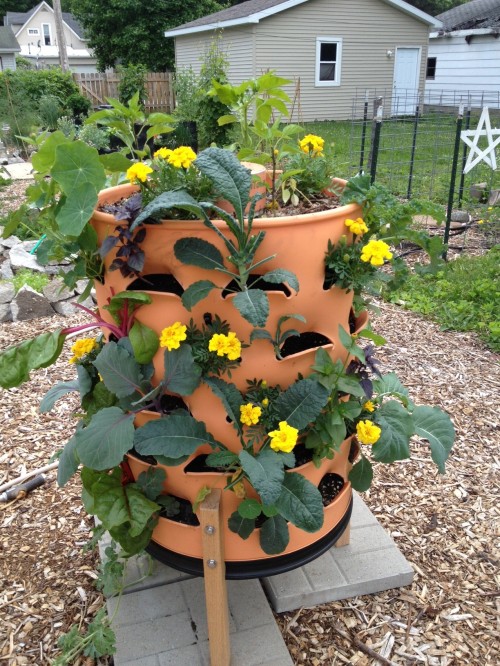 I had help with the soaker hoses (the Reiki training for yard work trades continue to work out great for everyone!), and we also got the pole bean area weeded, and some bamboo teepees installed and ready to support those scarlet runner beans:

The area in front of the house, which received mulch in Fall 2012 and Spring and Fall 2013 didn’t need any amendments. It’s lush and low maintenance, like I intend the rest of the yard eventually will be:

The back gardens were also already growing well without amendments, but they got some extra goodies, too: 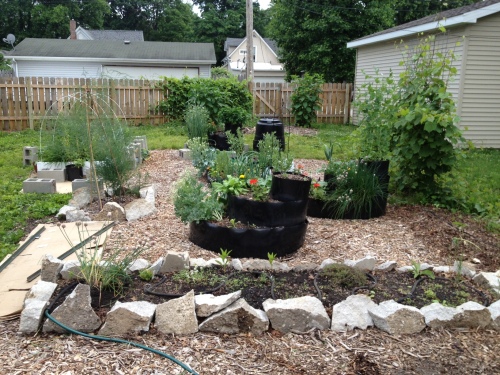 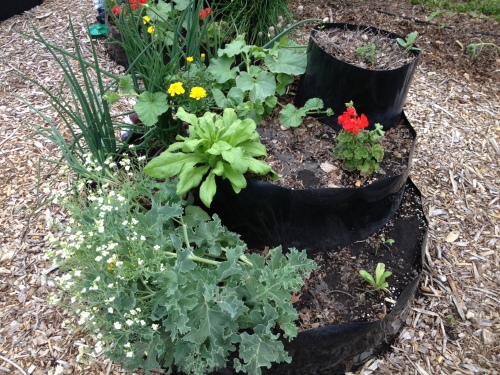 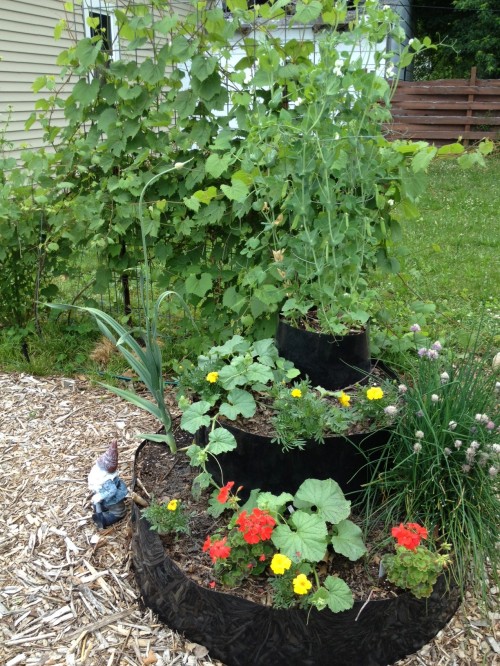 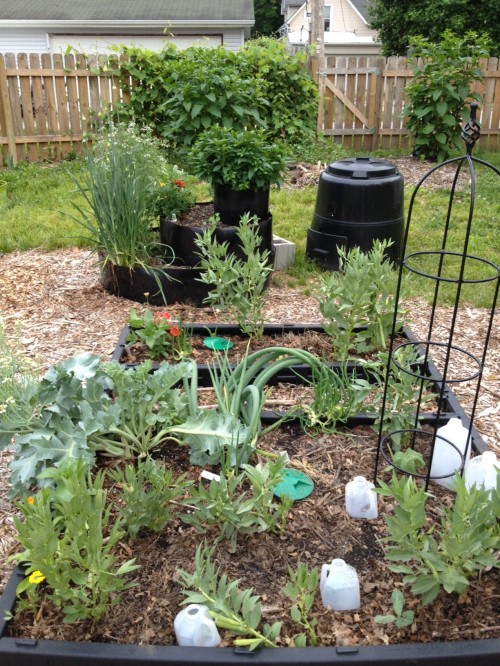 I have to laugh, because I don’t seem to be able to grow “easy” crops, but I do great with the “impossible” ones. I’m on my third batch of pumpkin seeds now, and yet the fava beans a farmer told me that no one can grow in the Goshen area continue to thrive. He had warned me that aphids go nuts on them, so I invited lady bugs for an early feast. We had lady bugs in March! My garden helpers in early April couldn’t believe how many they saw. Sure enough, they ate all the aphids and now some of my fava bean pods are 6 inches long. Meanwhile, things like basil, okra and pumpkins — easy enough for kids to grow — look awfully sad. Oh, well. I’m really excited about those fava beans! You can see in the distance in the other InstaBed that I need to harvest my leeks and clear out space for the calypso beans in that bed. The tall, front plants are shading my next crops. 🙂

The “Guarden” Bed has red Russian kale going to seed and gets thinned of turnips, carrots and parsnips every day, as I gradually clear the bed for bush lima beans and cucumbers, which are currently little sprouts. Already planted towards the back: Alaskan peas (almost ready to harvest), Brussels sprouts (taking over!), one round of cucumbers, and you can see garlic interspersed and nearly ready to harvest. You can also see pots of mint and geraniums in front of the bed, as I attempt to discourage whatever’s chowin’ down on my plants! I think the plants just aren’t super happy being so overcrowded, but I thought I’d confuse the bugs’ senses a bit, since I have tons of peppermint.

You can also see additional cardboard boxes where I’ve begun to smother out our “lawn” in favor of more wood mulch and/or more preferable ground covers that double as beneficial bug attractors. I’d rather let Nature do the work of hunting munchers. Wasps? You’re welcome. I just hung a solitary pollinator “Mason Bee Condo” on the back fence. Come one, come all. 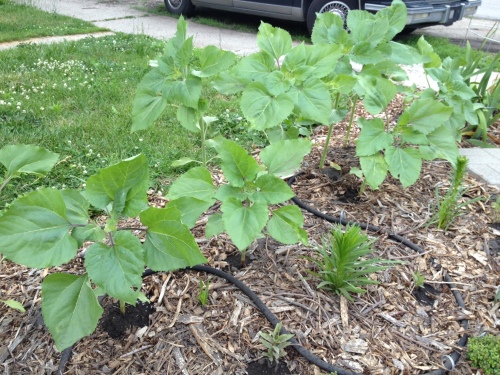 My sunflowers up front have begun to recover from a severe aphid attack while I ignored them as “my hardy, low maintenance front yard plants.” Um, no. They wanted attention, too. They got spritzed with Sea Magic three days in a row, plus the full spa treatment of soaker hose, worm castings, volcanic ash, Sea90 and rock dust. They better look good after all that! LOL, but seriously. 😉

Also in the comeback zone, my “carefree, grows anywhere, drought tolerant, so easy it’s almost a weed” aronia berry bush. You can see it on the left trying to survive, while the penstemon volunteer on the right flourishes:

This Saint John’s Wort that I transplanted to an inopportune location last summer where it sulked and feigned death for the rest of the year has also made quite the comeback this week: 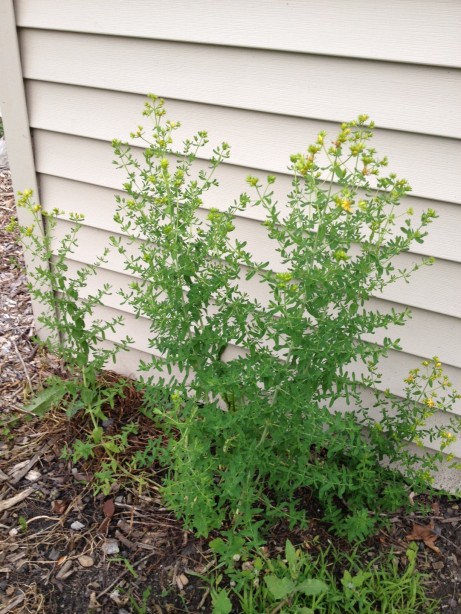 Our new scabrosa rose got its first bloom yesterday:

And one formerly very angry at being transplanted sage has decided to look pretty up front: 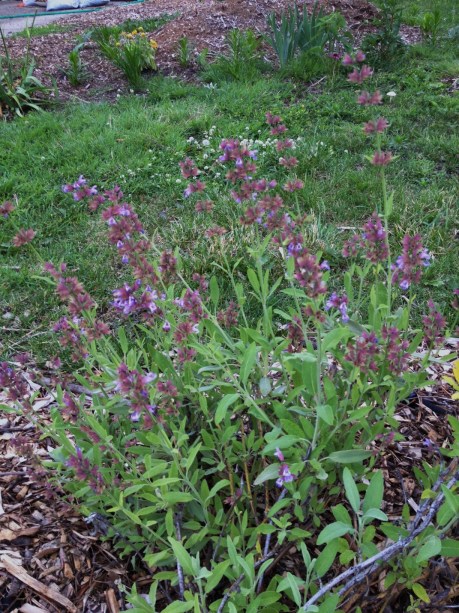 All in all, things are coming along. I still need David to help me install our rain barrels, which means I also need some bricks or other things to hold down all the cardboard boxes, since the barrels need to go on those concrete blocks. I’m almost ready for “Heather” to return from her vacation. What kind of wild project ideas she’ll have next, I do not know…..