A couple weeks ago, I mentioned having sent my Faery Garden Landscaper (pseudonym: “Heather”) on her very first ever vacation until I got caught up on all the earlier garden projects. Well, as of yesterday afternoon, I’m all caught up, and now she’s back. I just realized it this morning when some telltale magickal signatures showed themselves outside; however, I’m quite sure she actually returned last night. Because last night … oh, my … last night ….

Let’s just say, out of nowhere, someone inspired me to buy a lot more fruit trees and berry bushes for planting this summer, which means much more work on my part. The ground is harder; they’ll need more water and extra care; they’ll need lots of cardboard and hauling of wood mulch … and have I mentioned it’s July in the absurdly humid Midwest?

Everything lined up, though, including our landlord dropping by yesterday and expressing his heartfelt exuberance about me planting more fruit trees in the backyard, along with ornamental medicinal herbs along the south and west sides of his extra garage behind our house. He’s always given me freedom in the yard, but yesterday, he got visibly and verbally excited about my (distant) prospect of more fruit trees and “plants that no one will know to pick.” He actually got a mischievous glint in his eye as he imagined all these beautiful flowers that have “secret” medicinal uses.

During that same conversation, our next door neighbor (who also rents from the same landlord) came out and offered to assemble the compost bin I bought for his family. I had tried, but I’m much better at growing things than assembling things. That felt like a big check mark, and now I don’t need to ask David.

Anyway, back to the fruit trees. I have been reading “How to Make a Forest Garden,” which is an excellent book for anyone wanting to permaculture their yard. I guess the fruit tree purchases didn’t exactly come out of nowhere, but I really hadn’t planned to order anything until at least fall, but most likely spring. Somehow, last night, I hit upon a one night sale with free shipping and 25% off, and everything just came together so fluidly that David convinced me to go ahead with things. Mind you, I had forgotten all about Heather, so I leapt into this project assuming I’d need to do all the work myself.

The only thing I didn’t order was an Altissimo climbing rose to replace the freecycle.org rose bush that never came to life. I suspect the former owners did not remove it in the right way and let the root ball dry out, but in any case, it has acted as a placeholder for a spot that really deserves a climbing rose. None of the fruit tree or herb places had this particular kind of rose, though, so I thought I’d leave that order until next spring. My main hesitation? I dreaded having to dig out the rose bush, since it had been such a huge production to get it in the ground. We’re talking a five gallon bucket of dandelion roots, hard soil, and just generally rough digging.

Before going to bed, I asked for a sign supporting me in all these “crazy” purchases. Requests for new sessions came through in almost the same amount as I spent, but the real magick revealed itself this morning. I walked outside to find this:

The rose bush in question, neatly dug up! Apparently, the price for that labor was one head of a sunflower that was too shaded anyway by the trellised grape vine. I was so stunned, I immediately came into the house and told David, “I’ve seen a lot of things, and I’ve experienced a lot of synchronicities, but for some reason, this one just floors me!” Then I went back outside and found more evidence of a faery gardener in this polyculture that includes cantaloupe and basil:

The cantaloupe leaves had been shading the basil, but someone or something either ate or completely removed half of the largest leaf in the way. Now the cantaloupe shades the soil, but the basil gets to reach for the sun. This was the only “damaged” leaf in that bed. The aluminum foil is a trick I learned to keep squash vine borers from boring into the vines of curcubits. So far, so good, but I’m more impressed with the spontaneous pruning of just the right leaf!

The rest of the garden continues to grow well. I learned a valuable tip this week about comfrey. It’s even more amazing than I suspected. I know that people use it as mulch and as a compost starter, as well as a nitrogen fixer in the soil. I’ve done that before, too. What I hadn’t done was use it as a repeat mulch on ailing plants. I’ve spent a ton of money and time trying to get our very poor, sandy soil into richer organic matter that can hold moisture and nutrients. If you’re not lucky enough to begin with loamy soil, then it can take years before anything good will grow well without fertilizers and soil amendments, including organic ones like I use. Anyway, rock dust, volcanic ash, various types of prepared compost, sea minerals … I’m sure it’s all helped … but guess what finally turned around the most ailing of my plants?

For several days in a row, I’ve harvested huge leaves from my largest (of five) comfrey plants, placed them around “failure to thrive” plants and watered over the comfrey leaves. If I hadn’t seen it with my own eyes, I would not believe the turnaround. Now I know! Next year, the other four comfrey plants should be hardy enough to handle much more harvesting, and I’ll take root cuttings of the big one next spring. Free and on site sure beats hauling in from all over the place. I’m very happy to have all of this in process already, though.

The rest of this post includes a few selected photos of some areas of the garden: 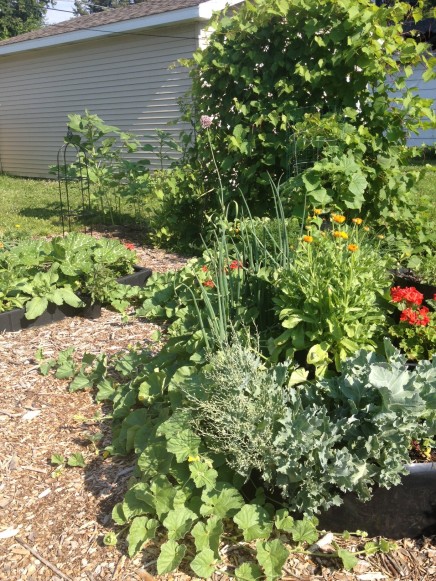 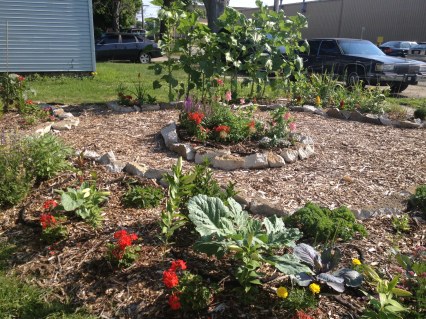 I’m still shaking my head about that rose bush! Maybe I’ll wake up to pre-dug fruit tree holes, too. Thanks, Heather, and welcome back! 😉