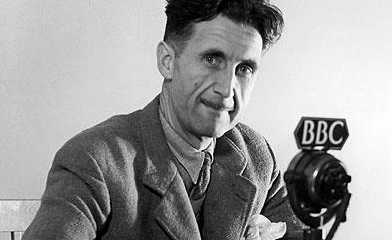 George Orwell would’ve scoffed at what passes for news todayIt’s been that kind of news day: the bloody obvious mixed with the bloody incredible.

But sometimes, this stuff is shovelled out there in images. Here’s the classic picture the liberal Nasty Israel industry puts out about Gaza:

And here’s some shots you’ll never see on Al Jhazeera and Russia Today…or in The Guardian:

I find it truly ironic that, some years ago, The Guardian’s ad agency (then called BMP) produced an outstanding commercial which said “only if you look from every angle can you really understand what’s going on”. It showed dramatic slowmo footage of a skinhead heading straight for an older white guy….apparently intent on mugging him. In fact, he was shoving him out of the way of falling debris from a building project.

Today, the Guardian – and other bastions of liberal Stalinism like the New York Times – do not show every angle: they show only their own anorexically narrow viewpoint. The same is true in the other direction of Newscorp – and its execrable Fox News – the Daily Mail and – increasingly – the Daily Telegraph.

There is an exciting development afoot in relation to that, on which I hope to enlarge tomorrow. In the meantime, everyone needs to grasp that we will never ‘understand what’s going on’ by reading the fevered imaginings of proprietor egos, outdated fluffy agendas or crazed misogynists – all of whom seek excuses for continuing to believe in a world that exists only in the past. And the past is not real.

This is why we all owe a debt to the likes of John Pilger and Anna Raccoon: across the full spectrum of ideas, there will always be writers, observers, comics, satirists and journalists who take the contrarian view. Those who take one look at a press handout and say “Bollocks”.

These people earn little beyond a life of vilification for their beliefs; but in 2014 – as indeed in 1914 – real journalism is not a popularity contest. As George Orwell remarked, “Journalism is publishing something the powerful do not want in the public domain. Everything else is just pr”.

Major hat-tip to VL for the picture research.

Related: The battle for belief about Malaysian Airlines flight MH17

Like Loading...
This entry was posted in Article, Links, reblog and tagged 2014, 6 August, Cameron, Disclosure, Earth, John Ward, news, spiritual, Spiritual evolution, The Eurozone & Gaza: Well They Would Say That, World, Wouldn’t They?. Bookmark the permalink.