Before I get into the extraordinary information that came thru the connections yesterday, the additional information of how we work now, I want to talk about my own personal experience yesterday, because I know it all ties in together.

I had to go back to the Cancer Center yesterday to release some of the increased amounts of red blood that my body seemed to make as it decreased my white blood.  All I could think of is a teeter-tater effect in my body, one goes down, the other must go up.  Since this is no different from giving blood at the red cross, I had no anxiety around the procedure, I had given blood lots of time thru my life.  Instead of a stab in the ass, my oncologist sent me to the phlebotomy lab to be drained.  By body wanted nothing to do with it and even tho they tapped my veins several times, my blood would not flow into that little bag for a fill up.  I requested a two-day reprieve that was granted and I went back yesterday. END_OF_DOCUMENT_TOKEN_TO_BE_REPLACED

The way that oil and gas fracking is practiced in the US is dangerous to public health exposing people living around wells to respiratory infections, cancer and a reduction in brain activity, David O. Carpenter, environmental health expert, told RT.

Scientists have discovered dangerously high level of cancer-causing chemicals in the air around fracking wells in five different states in the US. A report revealed that levels of benzene, hydrogen sulfide and formaldehyde were many times above American air pollution limits and were detected within residential areas near to fracking sites.

RT spoke with David O. Carpenter, author of the study to find out how dangerous fracking is for health.

Read the full story at : www.rt.com / link to original article

The UK government is not doing enough to tackle “petty corruption” in countries that receive British aid, a report warned.

The report was published on Friday by the Independent Commission for Aid Impact (ICAI). It found that while the Department for International Development (DFID), which handles most UK aid overseas, is trying to tackle corruption, it had failed to develop “an approach equal to the challenge, nor has it focused its efforts sufficiently on the poor.”

Therefore, the watchdog gave the DFID a rating of Amber-Red, which means it is performing relatively poorly and significant improvements must be made.
Read the full story at: www.rt.com / link to original article

From the 2010 Rockefeller Foundation brainstorming exercise, “Scenarios for the Future of Technology and International Development”: “In 2012, the pandemic that the world had been anticipating for years finally hit…national leaders around the world flexed their authority and imposed airtight rules and restrictions, from the mandatory wearing of face masks to body-temperature checks at the entries to communal spaces like train stations and supermarkets. Even after the pandemic faded, this more authoritarian control and oversight of citizens and their activities stuck and even intensified. In order to protect themselves from the spread of increasingly global problems—from pandemics and transnational terrorism to environmental crises and rising poverty—leaders around the world took a firmer grip on power.” END_OF_DOCUMENT_TOKEN_TO_BE_REPLACED

Another anti-police brutality protest turned violent in the French city of Rennes, with masked youths and police engaging in running street battles. The unrest follows the death of a young environmental activist earlier this week.

Overnight Thursday, protesters in the northwestern city lobbed flairs at police and flipped over cars, some of which they set ablaze. Police responded by firing tear gas. The number of arrests or injures, if any, remains unclear.

Comments Off on Riots, Clashes In France After Activist Dies In Police Grenade Blast – 31 October 2014

The newly brokered gas agreement, signed on Thursday, will cover gas supply and transit conditions between Russia, Ukraine and the EU until March 2015.

The signing was witnessed by European Commission President Jose Manuel Barroso, and the EC’s new vice president in charge of energy, Marosh Shefchovich.

From time to time, I reprint my interview with Dr. Barbara Starfield. Each time I try to write a new introduction.

In this case, I’ll highlight the arbitrary nature of scare-propaganda. And by arbitrary, I mean “has a covert agenda.”

For instance, suppose you learned that a single source in the US, every year, like clockwork, kills 225,000 people. That would be 2.25 million killings per decade.

Posted on October 31, 2014 by lucas2012infos | Comments Off on UK Police Slammed For Using Anti-Terror Laws To Uncover Secret Sources – 31 October 2014

British police have come under heavy criticism from MPs and journalists, who accuse them of using controversial laws to identify anonymous sources, despite such communications being ‘privileged’ and protected under common law.

According to journalists, senior officers used a law (often reserved for terror suspects) to reveal the names of protected sources who blew the whistle on two senior Met officials.

The stories were printed in The Sun and the Mail on Sunday, two of Britain’s largest national newspapers.

The law, known as the Regulation of Invest Powers Act (RIPA) was introduced in 2000, and specifies when authorities are allowed to access communications, particularly on the internet and mobile electronic devices.

Hundreds of US-led airstrikes and daily multi-million dollar military operations have failed to stem the tide of foreign fighters entering Iraq and Syria, who continue to pour in by their thousands, according to multiple reports.

“The flow of fighters making their way to Syria remains constant, so the overall number continues to rise,” a US intelligence official told the Washington Post.

Concrete changes might not be apparent for weeks the official said, noting the natural lag between the actual situation on the ground versus the scenario painted by analyzed intelligence.

With US intelligence estimating that 1,000 foreign fighters continue to enter Iraq and Syria every month, the Post estimates that their numbers now exceed 16,000. That figure eclipses the number of foreign fighters who took up arms in any analogous conflict over the past decades, including the Soviet military campaign in Afghanistan. 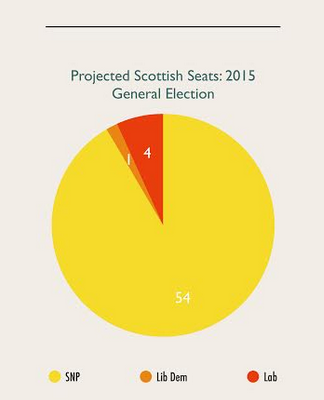 Most days I find numbers out there that belie the Molder & Scully stuff about it being The Truth.

And yet – extrapolating forwards – it appears that, in 2014 at any rate – the Truth is an X-file.

Perhaps until now, the only thing Scotland and Japan had in common was their admiration for Scotch Whisky. But as of today, the commonality is one of being in the vanguard of tits-up, hunker down global econo-political surrealism.

Just a few days back, I said I expected the SNP to get 13 seats in the 2015 UK General election. The first chart above suggests they could get 54. The Liberace Democrats will get, um, just the one.

Meanwhile, as the Bank of Japan sets out on a kamikaze mission to buy every asset in the world, Irene Marquita’s prodigious output points up just about the maddest pair of economic stats I’ve ever seen: housing starts down over 14% and construction orders down over 40%….the previous number having been +8.6%.

You really could not scope out a novel with a narrative quite so unlikely….viz, David Cameron could get back to power with the help of a Nationalist Party he opposes – with the power to implode the EU….or be blown off course and let in a Labour Government hoisted into power by a Japanese policy he applauds…and stay in the EU, which is what he really wants.

Earlier at The Slog: UK Chancellor dies after being hit by Champagne cork