Posted on November 5, 2014 by lucas2012infos | Comments Off on John Ward – At Last! Britain Leads The Entire Civilised World In Multi-Billion Pound Adventure: – 5 November 2014

The UK’s current account deficit climbed to £72.4bn last year, say the latest data from the Office for National Statistics. At 4.2% of gdp and climbing, it’s the biggest deficit in real terms for 66 years….and the biggest deficit of any major industrialised economy in the world.

Once again proving that our long-term economic plan is working, and getting worse. The Daily Telegraph’s view? It doesn’t matter. It’s PMQs in the Commons today. 200-1 that Ed Miliband fails to land a punch, even with that damning statistic to hand. But just to reiterate what a ballsup this is, the rebalancing of the UK economy is going so well, Rolls Royce has just fired 2,600 employees.

Elsewhere, reality continues to jump from windows throughout the theatre: having plunged nearly $100 in two weeks, the price of one ounce of gold has already this morning gone down a steep slope…from 1163 to 1148. 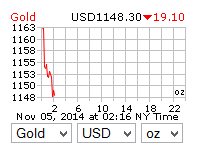 I’d imagine there’ll be a half-hearted rally within the next hour or so….but the general trend is down, down, down.

It’s value is being destroyed by those who balk at criticism of their beloved neoliberal system, but ignore the reality of its risibility.

The Bank of Japan reached a point overnight where it had sucked in a staggering 25% of all the country’s bonds. Not since the UK’s Labour Government slum clearance of 1957-50 has so much worthless crap been bought by so few.

69% of S&P market members were bearish at the close of play in New York, 9.30 GMT. And overnight in Asia, downbeat US economic data – plus a report from Markit Economics showing China’s services sector expansion is still decelerating – didn’t help.

But as for Stocks of course it’s BUY BUY BABY BABY BYE BYE out there.