Finally!!  I woke up with plenty of time to share.  Since we have set our clocks back one hour my body decided to use it for sleep, lots of extra sleep.  Geez!  Anywayz, no time to complain about myself, I got lots of catching up to do.

The very next day, after spirit saying now the cream of the earth is rising, don’t you know that is exactly how I seen every single reading, like everyone is standing in a clearing of whipped cream (only thicker than whipped cream.)  All 6 readings presented that way (along with their personal detail of course) on Thursday, then the first two yesterday… then everything faded to a white out.  All I could understand in relationship to this “cream” was it was of the earth and her energy and love supporting us and there to be used to enhance our desires.  Even tho we are now out on the fully functioning new earth, the readings have been focused on your skill set and where to focus on perfecting and bringing out that skill set.  But yesterday was a bit weird, I could see clearly, but the hearing was at first intermittent at best then just seemed to go away.  I kept thinking, I must have gotten all that whipped cream in my internal wiring, as the day progressed, I realized, I wasn’t completely off.

It took straight to my last reading, a beautiful soul down under, which put her into todays timeline, that gave us the rest of our evolution story.  Couple that with a text from spaceweather.com not even 10 minutes after our connection ended, like the cherry on the whipped cream of understanding!!

On Monday going into Tuesday, the energy released from the sun was targeted to our internal wiring, hitting our strongest places of abilities and use and spreading outwards within the body.  In contrast, yesterday was all about igniting the external field of creation, that space about 3-5 feet around your body.  What I seen as whipped cream is actually the conductor of energy from the earth, her gift unto you/us.  When my last lady of the day showed up, her entire field was in a white out (I could not see thru the white out) but above her was this bizarre looking storm system.  I could see its circulation, its movement, around and around (as opposed to Tuesday when the energy was straight up and down, incoming.)  The system itself looked like a cross between a brillo pad (metal) and a birds next and filled the width of her creative field left to right.  It took me a while (or should I say a lot of whining) to figure out what the hell I am seeing and what it means to her and to us.

That electrical storm system was setting itself down around the body, igniting all that whipped cream, electrical current generator, to enhance all abilities out in the world of creation.

I suddenly realized everyone who showed up yesterday was sharing a piece of the ongoing puzzle of our evolution, none received anything personal, but gave outwards to us.  I know that is not what you signed up for, but every one of us do appreciate your momentary sacrifice to help us see the importance of yesterday.

Like I said, when I finally figured out the craziness of yesterdays readings… and the importance of our external energy system being turned on, shortly there after, i got a text from spaceweather.com that the sun spit out another X flare:

X-FLARE AND CME: On Nov. 7th at 1726 UT, Earth-orbiting satellites detected a strong X1.6-class solar flare. The source was sunspot AR2205.  …Radiation from the flare ionized the upper layers of Earth’s atmosphere, producing a short-lived HF radio blackout on the dayside of our planet.  …The explosion also hurled a CME into space…

Almost at exactly the same time I am understanding the bird’s-nest electrical storm, the sun gave way to its expression to add the conclusion to what I was starting to understand.  Co-Creation/Co-Enhancement at its finest.

But with all that, let me back up to the first two connections of the day, which really really had me more frustrated than the white outs did.  I could see them clearly, my first lady, standing in the center of her whipped cream world (cleared out for her to stand within) suddenly like a clip from “What Dreams May Come” these beautiful painted flowers of purple and blue were set down to her right side (she was facing north/future) and almost bled a path to the east field.  Its like the color created a line that would eventually connect to an outcome, the east field of new beginnings…

The outcome of her deepest of desires.  For the last few years, flowers usually represented the Shambhala energy, heaven on earth, creators creating.  Couple that with the title and content of the movie “What Dreams May Come” said it all.  Even tho they refused to show us what was coming… her presence yesterday was there to tell us all, our Dreams are coming into fruition.

My second lady, I had zero audio at all with her, which really left me frustrated.  At least my first lady had intermittent audio, which helps fill in the visual story.  She was suspended about a foot above the earth, she was in the shape of an umbrella, but it was her herself.  The handle part of the umbrella was her body, the cloth part was moving energy, well, her body had all this moving energy too, it was all working in tandem with each other, one whole unit… The part that looked like the top of the umbrella even had bits of black cloth that I knew represented parts of the unknown energy field, the parts I could not see yet and was still undergoing whatever it takes to become available in the field of matter.

We can look at the suspended version of her, as half in and starting to come out of the quantum deep.

Never had a day been as bizarre as yesterday.  As I finished and started to get this several hours long revelation about what we did see yesterday, it was as if the entire day was emitted in the subliminal way advertisers do!!  Messages presenting to the deeper, unconscious part of ourselves.

Also, what came thru my last reading of the day as well, was we were being pre-pared to be fully functional as we hit the influx of energy coming thru on the 11/11.  I could see the pure white energy flowing into the gateway of the 11 and what we were undergoing.  Between my lady and the 11th was this bundle of energy, that even this morning, I can see, but cannot access its information (dammit.)  However, her team stated we are being prewired because something will be asked of us as we move into the 11/11 timeline.

I also want to mention as well, the other day (Tuesday) when I was completely down with headache and leaky eyes, I asked my team why do you not schedule these days on my days off, it sure would be much more convenient for all involved!!  They actually replied with something that made sense.  The energies have speeded up, going into the visual of a wave itself:

So the time we are above the viewable space and the time we are in deep with the quantum fields are more rapid now than ever before, this is due to the application of our own energy fields.  Meaning, because we are using and applying the creative mastery within the complex energy system now available, we have sped up the process, which was exactly what we wanted.  So, I will use the days off I already have planned as reschedule days if needed.

I do want to put this little tidbit out there too.  One of the ladies on the field earlier this week or maybe last week (time blurs) was given instruction to connect with gold.  She being one of the alchemists.  She was told to take one of her pieces of jewelry that has the highest gold content and start really connecting with it, it is a part of her power source.  Well, I downloaded the newest audio book from Eben Alexander (the author of Proof of Heaven) “The Map of Heaven” and in his introduction of this book he talked about the ancient alchemists and their use of gold.  Something about it being the most unique metal on earth and has the largest molecule and stuff.  In today’s world, we just kinda put an outrageous price on gold, call it valuable and completely forgot why it is valuable.  It’s your job to remember the real value, and use!!

The “Golden Age” just might be more real than symbolic!!

Also, pulling a snippet of another prior reading…  I cannot recall the personal details for my lady, but the color spectrum has been in the forefront of my mind since her connection.  Two elements of light that has been presenting itself over the years… what I call the fiber optics spectrum, where you can see the illumination of light thru color, then the metallic spectrum of color, where the light is reflected off of the color itself.  Creation creating.

The fiber optics is infusing your light of desire into the spectrum of creation, which is color at its most emotional frequency…

This is your output of creational energy, getting ready to become a manifested reality.  Of course, we are looking at the brighter, happier spectrum, this is as true for the ummmm…. negative emotional spectrum as well.  This is going to become crucial to know and understand in use as we (eventually) will be called to infuse the negative spectrum with purer light.

This changes the color into reality or solid light, creation itself.  Represented by the metallic field of light.  Think… peacock ore, AKA the Stone of Happiness: 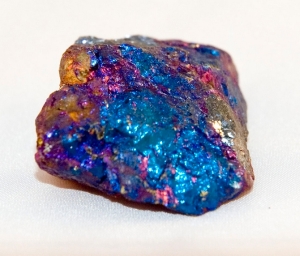 I knew there was much more to this stone than we realized, and there is!!  From a reading a while back, the information came thru that this stone was seeded on this earth by our friends from the stars, so it is not an earth rock, but a star seed just like us.  Now, its true value will be revealed to those who use its essence and power.

Thats all I have to say about that, for now!! lol  Wait… maybe not lol.  Take a gold necklace or bracelet and wrap it around a piece of peacock ore…. feel the alchemy, then use it!!  Feel deep within yourself and let the light come out in full creative expression!!

Another thing I wanted to share, spirit has been quite fussy with my use of words, especially when it comes to the use of “emoting vs emotion.”  When talking about our creative ability, spirit has been changing my word of emotion(s) to emoting.  I had to look up exactly what is emoting (in contrast to emotion itself) and I find the definition interesting: To express emotion, especially in an excessive or theatrical manner.

So, power up the fiber optics, express theatrically your desire, harness the metallic field of light made manifest… and let ‘er rip!!

On that note… have a power-filled day of light and emoting!!  I will continue to catch up with all thats bouncing around in me in the days to come!!

(((((HUGZ)))) of golden strings of creation wrapped around your hearts desires!!