Posted on February 25, 2015 by lucas2012infos | Comments Off on Mish/ Mike Shedlock – Cash For Gas: Russia Threatens To Shut Off Gas In Two Days For Lack Of Payment; Meter Maid Called In – 25 February 2015

Last year, Russia shut off gas deliveries to Ukraine for lack of payment. Most of the flow through Ukraine goes to Europe, but Russia accused Ukraine of siphoning off gas without paying for it.

In December, Ukraine agreed to prepay for gas. The flows resumed, but a major dispute has recently arisen.

I have called in the meter maid to investigate these claims and counterclaims.

Russia will completely cut Ukraine off gas supplies in two days if Kiev fails to pay for deliveries, which will create transit risks for Europe, Gazprom has said.

Ukraine has not paid for March deliveries and is extracting all it can from the current paid supply, seriously risking an early termination of the advance settlement and a supply cutoff, Gazprom’s CEO Alexey Miller told journalists. The prepaid gas volumes now stand at 219 million cubic meters.

“It takes about two days to get payment from Naftogaz deposited to a Gazprom account. That’s why a delivery to Ukraine of 114 million cubic meters will lead to a complete termination of Russian gas supplies as early as in two days, which creates serious risks for the transit to Europe,” Miller said.

Last week, Russian Prime Minister Dmitry Medvedev ordered the energy minister and the head of Gazprom to prepare proposals on fuel deliveries to the self-proclaimed Republics of Donetsk and Lugansk (DPR and LPR) after Kiev had cut off the delivery pipeline into the southeastern regions. Ukraine’s Naftogaz said it had halted gas supplies to eastern regions due to broken pipelines. 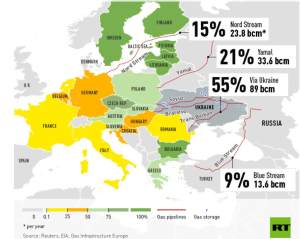 Russia supplies 30% of the European continent, and 55% of Russian gas flows through Ukraine.

After cutting off Ukraine’s gas for six months, Moscow resumed supplies in late-2014 when the two sides signed an interim agreement, under which Kiev would pay off some debt for past deliveries and pre-pay for supplies for the winter.

Naftogaz said the Russian firm had broken this deal by delivering only 47 million cubic metres (mcm) of a 114 mcm order that Kiev had paid for in advance last Thursday.

Last week Ukraine cut back supplies of gas to regions held by pro-Russian rebels, and Moscow began supplying gas to the separatist regions directly for the first time.

A Gazprom spokesman said at the time that the supplies to the rebel regions were being shipped under the contract with Naftogaz.

Russian natural-gas giant Gazprom is threatening to cut off supplies to Ukraine entirely as early as February 26, a move the Russian company says could result in a suspension of supplies to Europe.

The European Commission helped broker a deal last October between Moscow and Kiev that was meant to ensure Ukraine received gas during the winter and that supplies of Russian gas to Europe through Ukraine were not disrupted.

Under that agreement, Ukraine promised to pay off arrears for gas received and to prepay for future gas shipments, while Gazprom agreed to lower the price. That deal is valid until the end of March.

Gazprom said it is supplying gas to the parts of the Donetsk and Luhansk regions in eastern Ukraine that are controlled by pro-Russian separatists — since Kiev stopped supplying them.

Gazprom said it considers those two regions as being part of the contract with Naftogaz for supplies to Ukraine though the Russian company conceded that Naftogaz “does not take these volumes into account, as a result…estimates of how much prepaid gas has been supplied differ.”

While pondering the claims and counterclaims, I offer this musical tribute.

Link if video does not play: Lovely Rita – Beatles

I am pleased to note that “Lovely Rita” just pinged me with a rhetorical question as well as her official opinion.

Rita asks “If pipelines to the Eastern regions are broken, how is it that Russia can use them, but not Ukraine?”

Rita says “It’s pretty easy to see what has happened. One does not even need a meter. Ukraine is broke and does not want to pay for gas delivered to Eastern Ukraine.”

For more on the plight of Ukraine and its budget woes, please see Ukrainian Currency Comparison: Budget Rate vs. Official Rate vs. Interbank Rate vs. Street Rate.