It’s amusing watching all the GDP forecast downgrades in the wake of a huge string of bad economic data reports, one after another.

The Fed forgot to update their picture. It still looks like this. 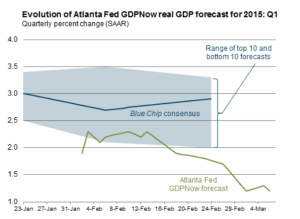 I am wondering what the “Blue Chip” forecasters are smoking. By any chance are they getting high off the glue in the string of recent jobs report?

To be fair, the “Blue Chip” forecast is as February 24, but by then the Fed Model had already been heading south.

Regardless, we are now at 0.6 percent and falling fast in the Fed model. The latest “Blue Chip” forecast is seemingly Eight Miles High.

This calls for a musical tribute.

Link if video does not play: Byrds – Eight Miles High.

Of course, there is one rational explanation for these estimates to be so wildly different: Weather Unexpectedly Much Worse Than Economists Previously Thought.