By Wes Annac, The Culture of Awareness

We have to be strong in the face of temptation or depression, and as hard as it can be, we have to stay true to our mission when we don’t feel like we can persevere.

We have to be able to return to love, the center of it all, when we have trouble cultivating the positivity and selflessness that help us make other people’s lives better.

Negativity and depression might routinely surface and try to keep us from our work, but it’s essential not to let them take root in us.

I was excited the other day when I rediscovered ‘karma yoga’ and the idea that we can use creativity, selfless service and nearly constant activity to achieve enlightenment, because I felt like I finally had some things figured out.

I struggled with the idea that the only way we can spiritually evolve is to constantly meditate or dissolve fully into nothingness, because a lot of conscious people feel like they’re here on a mission to uplift the world, which requires a lot of work and contradicts the advice we’ve been given to ‘become nothing’.

I’m one of the legions of spiritual seekers who are on a mission to uplift the world, and it was liberating to think that constant, heart-centered work can actually be a means to enlightenment.

I didn’t feel quite as liberated the day after I realized all this, however. Instead, I met a lot of obstacles within that I now know I have to transcend before I can successfully traverse the path of karma yoga (a.k.a. continued, selfless service).

The day after rediscovering karma yoga and being so excited to work hard, I dealt with lethargy and an unrelenting urge to satisfy any materialistic impulse that presented itself. I felt like I wanted to do anything but work!

I wanted to indulge in bad food, nap on the couch, sit in a depressive haze, and do anything else that kept me from working. After discovering a path to liberation that I was really excited about, I felt anything but passionate or excited.

As strange as it sounds, the last thing I wanted to do was spiritual work (writing, music, blogging, etc.), and I’m usually pretty excited to do it. For one reason or another, depression and laziness were much more appealing.

I’m realizing now that the depressive, lazy haze I was in is the first obstacle I need to surpass before I can successfully walk the path of selfless service. I met my first obstacle on the path of karma yoga, and now that I’ve realized it, my fire’s lit again and I’m excited to work through it.

Most of us carry some pain or negativity within, which can easily influence us if we aren’t careful.

While we aren’t meant to ignore or run away from any negativity we carry within, I think depression and the lethargy that can come with it are the enemies of a lifestyle that’s rooted in unconditional love and selfless service.

I think those low, awful feelings represent an even greater beast within that I have yet to tackle, and instead of processing them and working through them, I fed them and had a lot of trouble getting motivated to even write this article, much less do anything else.

It took a long time to get back into a space where I was not only comfortable writing, but excited about it. Now that I’m back in this space, I’m realizing that the feelings I dealt with are enemies in the fight to cultivate a conscious, unconditionally loving, selfless lifestyle.

I don’t mean to make them sound so bad, nor do I mean to say we should resist them, because again, the best thing we can do is sit with them and try to work through them. Directly feeding them or letting them bring us down, however, is the worst thing we can do for ourselves and especially our spiritual work.

They aren’t our friends, and their comfortable numbness (to quote Pink Floyd) is destructive to our work and our goal to uplift the planet. If we want to do anything significant in our short time on this evolving planet, we have to work through anything we still carry within that blocks or impedes our progress.

My progress was definitely impeded, and I’m realizing that I impeded it by giving in to those low emotions instead of working through them or refusing to let them get me down. The best way to ‘fight’ depression is to stay strong when we feel it, and the best way to heal it is to work through it when it presents itself.

We don’t help ourselves or anyone else when we succumb to the low feelings that can stop us from doing our work, and it’s essential to work through them if we want to keep presenting work that uplifts everyone else who’s awakening and dealing with their inner demons in their own ways. 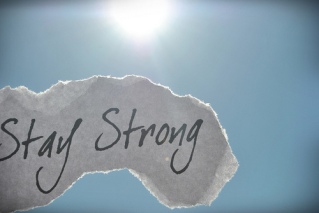 Our work could help people who are fighting their own battles, which is why it’s essential to stay busy and refuse to wane in favor of depression, distraction or anything else that keeps us from shining our light for everyone to see.

We’ve learned that the ego will resist its own demise, and in this case, its demise comes in the form of enlightenment.

Since the path of selfless service and spiritually inspired creativity is also a path to enlightenment, it makes perfect sense that the ego would present all kinds of negative, twisted emotions in an effort to delay its inevitable demise.

The ego isn’t the monster it’s usually made out to be by spiritual teachers and writers, but it can hinder us if we let it get out of control and enlightenment is the last thing it wants.

Again, enlightenment spells the death of the ego and a rebirth into a reality that’s driven entirely by egoless-ness, and while we don’t need to hate or renounce our ego, we can still surpass its influence if it throws depression or anything else our way.

I posted a quote from Alan Watts in a previous article, which said “the ego is nothing more than the focus of conscious attention”, and I think this quote’s important to understanding what the ego is, how harmless it is, and yet, how far down it can bring us if we don’t keep it in check.

Depression, gluttony and other forms of negativity or indulgence are definitely products of the focus of conscious attention, but a lot of spiritual seekers don’t realize that we can use that focus progressively.

It might sound like a contradiction, but we can use the ego to find enlightenment. With karma yoga or other forms of selfless action, we can lose the destructive aspects of the ego while letting its constructive aspects grow.

Eventually, we’ll be left with nothing but those constructive aspects, and maybe this is true ego death. I’m just guessing here, but maybe true ego death isn’t ego death as we perceive it at all.

Rather, it can be the death of the parts of the ego that make us want to indulge in bad food or sit in silent depression all day long instead of calling on our love and creativity and using them progressively.

I do think enlightenment will bring ego death, but maybe our perception of ego death is slightly off. I’ve been thinking about this for a while now, because there are aspects of the ego that helps us along this wild spiritual journey.

Those people will eventually transcend the parts of their ego that hold them back, but a lot of conscious people seem to be able to use the ego progressively, if not all-out transcend it and embody pure love, consciousness and awareness.

Maybe true enlightenment is the integration of every aspect of our being and the recognition that they’re all necessary on one level or another. Maybe the enlightenment we seek will come as a result of our acceptance of everything that lives within, even if it’s particularly ego-driven, and once we can accept it all, we’ll truly liberate ourselves.

Maybe the ego is necessary in some ways. Instead of being a horrendous beast that keeps us from enlightenment, it can actually help us with our goals if we can confront and transcend the parts of it that hold us back.

This is all speculation, of course, and the main point I want to make is that we have to be strong when we face temptation to get depressed or indulgent instead of working hard in the name of enlightenment and spiritual evolution.

Our role in this collective evolution is more important than we tend to realize, and whether we all-out transcend the ego or transcend its negative aspects and use its positive ones progressively, staying strong and busy is essential.

It’s essential to stay active and only break our activity for meditation or the exploration of our inner silence, which is one of the strongest (if not the strongest) paths to enlightenment.

We have to live for love, spirit and service instead of depression and indulgence, and however hard it might be when we wake up every day with the same battle raging within, it’ll get easier when we choose love and make every effort to stay on that path.

Everything gets easier with time and patience, and if we can embrace love, creativity and selfless service over the destructive, degrading qualities that have kept us down and held us back, we’ll become the angelic force that’s here to uplift the world.

It requires dedication and the willingness to stick with our work when the usual negative or materialistic urges surface, but we can easily surpass these obstacles if we stay strong and commit so heavily to our role that nothing, however appealing, stops us from being who we are.

I’m a twenty-one year old writer, blogger, musician and channel for the creative expression of the Universe, and I created The Culture of Awareness daily news site.

The Culture of Awareness features daily spiritual and alternative news, articles I’ve written, and more. Its purpose is to awaken and uplift by providing material about the fall of the planetary elite and a new paradigm of unity and spirituality.

I’ve contributed to a few different spiritual websites including The Master Shift, Waking Times, Golden Age of Gaia, Wake Up World and Expanded Consciousness. I can also be found on Facebook (Wes Annac and The Culture of Awareness) and Twitter, and I write a paid weekly newsletter that you can subscribe to for $11.11 a month here.