Jon Rappoport – Medical-Drug Destruction Of Life, By The Numbers – 29 April 2015

I’ll just give you the horrific quotes now and discuss the source afterwards:

“They [the drugs] cause an epidemic of about 20 times more [6.6 million per year] hospitalizations, as well as falls, road accidents, and about 80 million [per year] medically minor problems such as pains, discomforts, and dysfunctions that hobble productivity or the ability to care for others. END_OF_DOCUMENT_TOKEN_TO_BE_REPLACED

Comments Off on Jon Rappoport – Medical-Drug Destruction Of Life, By The Numbers – 29 April 2015

A British intelligence tribunal is due to rule on a major privacy case relating to Libyan dissident Abdel Hakim Belhaj and alleged government spying on confidential conversations with his lawyers.

Belhaj’s legal representatives brought his case to the Investigatory Powers Tribunal (IPT) after secret documents released by NSA whistleblower Edward Snowden exposed the extent of US and UK surveillance.

The British government has fought to keep a key section of the legal decision secret on the grounds of national security.

Russia’s upper house of Parliament, the Federation Council has ratified an agreement to establish the $100 billion foreign currency reserve pool for the BRICS group. It is intended to protect national currencies from volatility in global markets.

The currency pool will primarily support the balance of payments of the BRICS member states, according to the deputy head of the Federal Council Committee for Budget and Financial Markets Sergey Ivanov.

“Realization of the agreement will also contribute to the effective protection of the national currencies against the volatility in the world currency markets,” Ivanov said.

Welcome back to The Asia-Pacific Perspective, where James Corbett of corbettreport.com and Broc West of apperspective.net bring you the latest news from the Asia-Pacific region. This month:

END_OF_DOCUMENT_TOKEN_TO_BE_REPLACED

Unforgettable Password: Smartphones Could Soon Be Unlocked With Ears – 29 April 2015

Posted on April 29, 2015 by lucas2012infos | Comments Off on Unforgettable Password: Smartphones Could Soon Be Unlocked With Ears – 29 April 2015

If you think typing in a four-digit pin number to unlock your smartphone is simply too burdensome, you may soon have other options. Yahoo has developed a way to use your ear, palm, fingers, or knuckles to access your device.

The system, called Bodyprint, turns a regular touchscreen into a biometric scanner which can recognize the unique shape of a user’s body part.

Created by Yahoo Labs in California, the project was presented earlier this week at the 2015 Computer-Human Interaction Conference (CHI) in Seoul.

In a demonstration at the event, a Bodyprint user received a call on his smartphone. He was able to unlock his phone by simply pressing it to his ear – a task that took less than a second. Further details can be found in a paper written by the developers.

Comments Off on Unforgettable Password: Smartphones Could Soon Be Unlocked With Ears – 29 April 2015

Posted on April 29, 2015 by lucas2012infos | Comments Off on 2 Reportedly Shot During Ferguson Protests After Baltimore #FreddieGray Unrest – 29 April 2015

Two people have reportedly been shot in Ferguson, as #FreddieGray protests engulf the city following large-scale unrest in Baltimore.

One person was shot in the leg in Ferguson, and the victim’s condition remains unknown. According to local media reports and eyewitness accounts, the man ran to a Chinese takeaway restaurant for help and was subsequently taken away in an ambulance.The gunman has allegedly been apprehended. The shooting happened near where #MichaelBrown was killed. 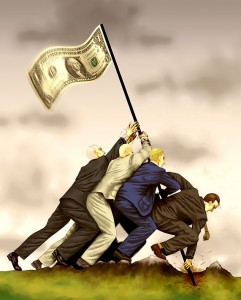 However hesitantly it may be asked, I realize this is a serious question. We all still live in a world where, like it or not, 99.9% of the people around us still treat these colorful pieces of debt-based central bank-authorized funny money as the only possible form of payment. And that means we all need to find ways to collect them. So my standard reply is equally half-joking, half deadly serious: “If you’re looking to make money, you’ll never go broke investing in the military-industrial complex.” END_OF_DOCUMENT_TOKEN_TO_BE_REPLACED

Comments Off on James Corbett – The Corbett Report – Profiting From War Has Never Been So Easy! – 29 April 2015

The European Parliament has adopted new rules aimed at reducing the pollution stemming from irrepressible use of plastic bags. Shoppers will be obliged to use re-usable bags, less hazardous for the environment, or pay extra at the counter.

Once the rules are confirmed later this year, the 28 member states will be required to reduce the use of plastic bags by some 80 percent by 2025.

The states will have a choice of which route to take to achieve the set target. The first choice is for shoppers to reduce the use of “non-biodegradable plastic bags to 90 lightweight bags per citizen by the end of 2019 and 40 by the end of 2025,” the EU Parliament press release reads.

The forest fires in the Chernobyl exclusion zone may re-disperse a significant amount of original radiation contamination, depending on whether the fire continues in its trajectory toward the epicenter, evolutionary biologist Timothy Mousseau told RT.

Timothy Mousseau: Well, from what I can tell, and there hasn’t been a lot of detailed information available, but based on the satellite image that I’ve seen and an area on the map, the Chernobyl map that has been outlined for me by people who are working in the town of Chernobyl right now – they’ve suggested it is to the south of the main contaminated area and heading north. And if you look at the satellite image you can see that the clouds, the smoke is heading directly towards Minsk, Belarus. And I suppose that is good news for Ukraine, but bad news for Belarus.

RT: And how worried should Belarus be then?

The electorate is not paying attention to the issues, and none of the politicians are talking about the real issues. So what right am I exercising if I vote?

For the benefit of veteran Sloggers alone, I suppose I must post in the light of Monday’s ONS data….if only as a tribute to their patience.

Since 2013, I’ve posted seven times to say that the 2015 UK General Election was always going to be a race against time in the context of the Camerlot ‘economic recovery’ bollocks. That is to say, Chancellor of the Exchequer George Osborne had to cross his fingers and hope that the plates stayed in the air long enough to fool enough of the electorate into returning them to Office. END_OF_DOCUMENT_TOKEN_TO_BE_REPLACED

Comments Off on John Ward – Election Opinion : When Voting Is About Real Choice Again, Then I’ll Start Voting Again – 29 April 2015