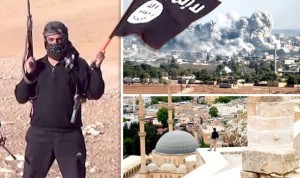 Introduction: James Corbett, investigative journalist and host of The Corbett Report, joins us once again, this time for a detailed interview on the subject of ISIS. END_OF_DOCUMENT_TOKEN_TO_BE_REPLACED

The active ingredient in the world’s most widely-used Roundup herbicide has been classified as “probably” carcinogenic to humans by a branch of the World Health Organization. The agrochemical giant Monsanto, has immediately rejected the new conclusions.

The International Agency for Research on Cancer (IARC), in their latest study said that there was “convincing evidence” that glyphosate in Roundup can cause cancer in lab animals.

St. Louis-based Monsanto was not pleased with WHO conclusions, claiming that scientific data does not support their assumptions and urging the health watchdog to hold a meeting to explain the findings.

Comments Off on Too ‘Dramatic’: Monsanto Shuns WHO Verdict That Roundup ‘Probably’ Causes Cancer – 21 March 2015

The Golden State will get a $1 billion package to provide immediate relief to try and stem future water problems. Officials assure the population that they will not run out of water completely as the state enters its fourth year of drought.

On Thursday state governor Jerry Brown and a bipartisan group of state lawmakers announced a one billion dollar package to provide immediate relief to try and stem future problems.

“This is a struggle, something we’re going to have to live with. For how long we’re not sure,” said Brown during a press conference.

The world’s second largest economy, China, was expected to participate directly in setting the new price fixing. However, no companies from China have been confirmed, although Chinese banks were among those in talks to take part. Chinese players may be added in the future, Finbarr Hutcheson, president of IBA, was cited as saying at a press meeting in London earlier on Thursday by Bloomberg. No Chinese companies have ever directly participated in the nearly 100-year-old fixing while gold demand in China, last year’s second-biggest bullion buyer, has more than doubled since 2009. The country is expected to consume almost half the world’s gold output by 2020.

Comments Off on Goldman And UBS Join New Gold Pricing, No Chinese Banks Yet – 21 March 2015

On this week’s edition of Financial Survival, James and Alfred discuss Fukushima, the Israeli election, and ISIS and the phoney war on terror. They also talk about the search for truth, dissemination of information, and importance of community in the era of the internet. END_OF_DOCUMENT_TOKEN_TO_BE_REPLACED

Comments Off on James Corbett – The Corbett Report – Interview 1017 – Financial Survival: Searching For The Truth – 21 March 2015

Posted on March 21, 2015 by lucas2012infos | Comments Off on Irish wWater Struggle: Thousands To March Against ‘Ideologically-Driven’ Water Charges – 21 March 2015

(A still from Ruptly video)

Thousands of anti-austerity campaigners are expected to pulse through the streets of Dublin on Saturday in protest against the Irish government’s controversial water charges. They warn the charges are an “ideologically-driven tax” that must be abolished.

The water tax forms part of the Irish government’s wider debt re-payment plan in the wake of a crippling bank bailout that cost Irish taxpayers over €64 billion.

Thousands are expected to gather in central Dublin to voice their opposition to what they say is double taxation imposed on a nation strangulated by debt. Three separate marches, highlighting the impact of austerity, are planned for Saturday afternoon.

Read the full story at at: www.rt.com / link to original article

The Tokyo Electric Power Co. says almost all the nuclear fuel in one of its reactors at the Fukushima plant has melted. The discovery at Reactor 1 should help with the clean-up operation and decommissioning of the stricken nuclear power station.

The Tokyo Electric Power Co. (TEPCO) and the International Research Institute for Nuclear Decommissioning (IRID) have been working since February, studying the interior of the reactor building at the Fukushima No. 1 nuclear plant.

TEPCO, which is in charge of operating the plant, used cosmic rays to inspect the reactor building. By analyzing the flow of muons, which are subatomic particles generated when cosmic rays collide with the atmosphere, the utility was able to create an X-ray like image of what the inside of the reactor looks like.

Venezuelan democracy is real. It’s the hemisphere’s best. It shames America’s sham system.
It threatens no other country. It doesn’t bully, harass, invade or terror-bomb them. It fosters good relations with all nations.
Its Constitution mandates governance of, by and for everyone equitably. Its policies are polar opposite US imperial lawlessness.
On Wednesday, President Nicholas Maduro initiated an international campaign challenging Obama outrageously calling Venezuela a threat to US national security.

END_OF_DOCUMENT_TOKEN_TO_BE_REPLACED

People across Europe and other parts of the world gazed with awe skywards on Friday to see a rare type of solar eclipse, which has coincided with other celestial events such as the spring equinox and a supermoon.

Only those in parts of the Artic and the north of Europe were lucky enough to witness the eclipse in its totality. But millions were able to see a partial eclipse in other parts of Europe, North Africa and West Asia.

The rare coincidence of the solar eclipse and the vernal equinox is not expected to occur until the year 2034. The supermoon is a phenomenon, which sees the moon’s position closer to Earth than usual.

Companies who employ hydraulic fracturing ‒ also known as fracking ‒ on public and American Indian lands will have to publicly disclose what chemicals they use during the process, according to fracking rules released by the government.

The Bureau of Land Management issued the first federal regulations of fracking on Friday, which come into effect in 90 days. Along with disclosing the chemicals, companies will have to ensure the protection of groundwater supplies, increase their standards for interim storage of recovered waste fluids, and take measures to lower the risk of cross-well contamination.

“Current federal well-drilling regulations are more than 30 years old and they simply have not kept pace with the technical complexities of today’s hydraulic fracturing operations,” Secretary of the Interior Sally Jewell said in a statement. “[I]t is absolutely critical the public have confidence that transparent and effective safety and environmental protections are in place.”

REead the full story at: www.rt.com / link to original article