After conquering the wasted lands, the quest of the warrior again commands that we march into a world unknown – the wilderness we call our home.

We are entering Hades’ lair. Don’t be afraid! The new lunar cycle in Scorpio brings with it a powerful cosmic flush in which the process of total inner transmutation is available for us. In order for us to do so we will need to confront the inner core vibration of who we are. We have to dig deep, to the soul level. END_OF_DOCUMENT_TOKEN_TO_BE_REPLACED

The European Union has to come up with clear criteria for lifting sanctions against Russia, as it has to be done sooner or later, Frank-Walter Steinmeier, Germany’s foreign minister, said.

In an interview with Die Zeit weekly, Steinmeier said that the EU hasn’t agreed yet on what prerequisites should exist to revoke restrictions imposed on Moscow over the events in Ukraine.

“Even if the moment hasn’t come to lift sanctions, we should bewilder with a question as to what should be next,” he stressed.

The once ubiquitous Nokia brand of mobile phone is no more. New owners Microsoft are making a clean break from the brand made famous with its old-school “brick” phones. Cutting edge smartphones from the company will now have the Lumia brand.

Nokia’s French Facebook page was the first to deliver the news with a post on Tuesday informing fans that the name is changing from Nokia to Microsoft Lumia.

“In the coming days, you will receive a Facebook message regarding the change of name of this page. We are on the verge of becoming Microsoft Lumia. Stay-tuned for more soon,” the statement said, in French. 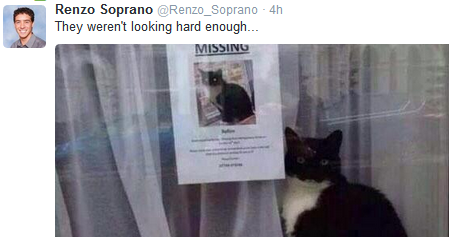 END_OF_DOCUMENT_TOKEN_TO_BE_REPLACED

Comments Off on John Ward – Scene Around: Fun And Games On The Internet – 23 October 2014

The eurozone may be entering another stage of recession as governments, banks and companies struggle to cut their massive debts in a period of weak economic growth, rating agency Standard & Poor’s has warned.

The European currency block is entering a new stage of economic crisis, S&P said in a report on Thursday.

“We think the eurozone might be entering a stubborn phase of subdued growth as deleveraging continues and the world economy weakens,” the paper reads.

The warning followed manufacturing data which showed a slump in France in October. The Markit Flash Euro Zone Composite Output Index fell to 48.0 comparing to 48.4 in September. That is the lowest since February. A reading below 50 marks a contraction in private sector activities. France’s economy has been nicknamed the ‘sick man’ of Europe in recent months.

Comments Off on Eurozone Crisis Might Not Be Over, S&P Warns – 23 October 2014

India will be glistening with gold in the next few days, as millions celebrate Diwali, the festival of lights. The holiday has pushed up demand for gold. In September the country imported $3.75 billion worth of gold jewelry in preparation.

Diwali, known as the festival of lights, is a five-day celebration with fireworks, candles, sparklers, and other lighting displays by millions of Hindus, Sikhs and Jains across the world. The first day this year is October 23, and it usually falls between the last two weeks of October and the first two of November.

During the five-day festival, people dress in their best new clothes, and of course, gold jewelry. Nearly 20 percent of annual jewelry sales are attributed to the holiday.

Posted on October 23, 2014 by lucas2012infos | Comments Off on John Ward – UK Opts For Wind Strategy Just Dumped By China. Ed Miliband Tweets ‘Lovely Evening Celebrating Diwali With Hindus, Sikhs, Jains And Buddhists From Around London This Evening At The @UKLabour Diwali Reception’ – 23 October 2014

Want to opt for No Change next May? Vote Labour

If you ever get the feeling that barely a single Westminster policy is being done with us in mind, then congratulations, you’re sane. It’s all done in our name, of course…which is why, when it goes wrong, we always wind up paying for it.

And talking of wind, here’s yet another sign that our energy policy is all over the place. Taking the easy route out of wind power by avoiding Nimby on land, Owen Paterson dec. Minister of Defra decided to stick with offshore…this despite the fact that the upkeep costs involved in that are horrendous. END_OF_DOCUMENT_TOKEN_TO_BE_REPLACED