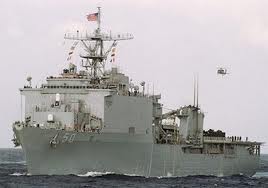 Yesterday I posted a Smoke Signals on the subject of the oddly secret Corfu visit of American 6th fleet amphibian landing ship the USS Carter Hall (left) twice in the last ten days.

It now transpires that four days ago, the Greek government confirmed that Norwegian seismic surveys in the waters of the Ionian islands have shown that these areas are rich in oil and natural gas. The results were confirmed by the Ministry of Environment, Energy & Climate Change. END_OF_DOCUMENT_TOKEN_TO_BE_REPLACED