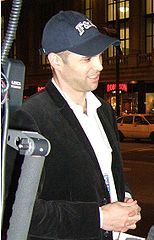 By Matt Taibbi
I almost couldn’t believe it when I heard that JP Morgan Chase was going to do a live Twitter Q&A with the public – you know, all those people around the world they’ve been bending over and robbing for, oh, the last decade or so. On the all-time list of public relations screw-ups, it’s hard to say where this decision by America’s most hated commercial bank (with apologies to Bank of America, which probably finishes a 49ers-like very close second this year) to engage the enraged public on Twitter ranks. For sure, anyway, it’s right up there with Abercrombie and Fitch’s rollout of thong underwear for 10 year-olds and the $440,000 afterparty AIG executives threw for themselves at the St. Regis Resort in Monarch Beach, California after securing a federal bailout.
Read the whole story at: www.rollingstone.com / link to original article