Christine Lagarde, head of the IMF, is in court today addressing her role in a $366 million payout to Bernard Tapie, a close friend of former president Nicolas Sarkozy who was also Lagarde’s boss at the time. Lagarde was Sarkozy’s finance minister. Reuters reports IMF’s Lagarde in court for French arbitration case.

IMF chief Christine Lagarde was questioned in court by French magistrates on Thursday over her role in a 285-million-euro ($366 million) arbitration payment made to a supporter of former president Nicolas Sarkozy.
END_OF_DOCUMENT_TOKEN_TO_BE_REPLACED

Comments Off on Mish/ MIke Shedlock – Christine Lagarde, Head Of IMF, In Court Facing Questions Od Embezzlement And Fraud – 24 May 2013

“If Spain wants it, we could help in diverse ways, for example by simply auditing and monitoring reforms negotiated with its European partners without the IMF participating in financing,” Lagarde told French daily Le Figaro. END_OF_DOCUMENT_TOKEN_TO_BE_REPLACED

Mish/ Mike Shedlock – Christine Lagarde, IMF Chief, Warns US About Short, Medium, And Long-Term Problems; Like All Keynesian Clowns, Lagarde Does Not Want To Deal With The Present – 22 September 2012

Posted on September 22, 2012 by lucas2012infos | Comments Off on Mish/ Mike Shedlock – Christine Lagarde, IMF Chief, Warns US About Short, Medium, And Long-Term Problems; Like All Keynesian Clowns, Lagarde Does Not Want To Deal With The Present – 22 September 2012

For a brief moment, I almost thought Christine Lagarde, head of IMF, gained control of her senses.

The Telegraph headline IMF chief Christine Lagarde says US needs to rein in its banks is the illusion that briefly (very briefly) led me astray.

Not to fear, in the end, Lagarde proved in spades that she is the same Keynesian clown as before. Let’s take a look where she makes sense, and doesn’t. END_OF_DOCUMENT_TOKEN_TO_BE_REPLACED

Comments Off on Mish/ Mike Shedlock – Christine Lagarde, IMF Chief, Warns US About Short, Medium, And Long-Term Problems; Like All Keynesian Clowns, Lagarde Does Not Want To Deal With The Present – 22 September 2012

My friend Bran reports from Spain that IMF urging Spain to raise VAT, reduce public pay and positions, and eliminate housing deduction is the headline of every main news broadcast and newspaper. END_OF_DOCUMENT_TOKEN_TO_BE_REPLACED

John Ward – Euroblown : New ‘Yes And No Perhaps’ Threat Form IMF To Greece: Greek Politicians Told To Ignore Electorate Or Lose Out – 8 May 2012 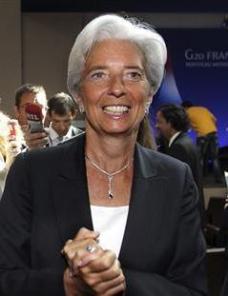 “The IMF is threatening Greece that they will stop paying bailout instalments if the new government disagrees with the future austerity measures as outlined,” an IMF official to the Dow Jones news agency said last night (writes The Greek Reporter)

According to the news agency, the creditors will wait until Greek parties form the new government, but they do not intend to change their plans. On the contrary, they call on Greeks to obey the ‘rules’ and observe the pledges. END_OF_DOCUMENT_TOKEN_TO_BE_REPLACED 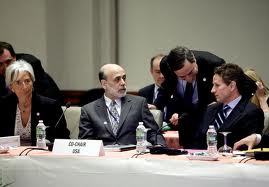 Astonishing details of a Greek default plot hatched by Wall Street and the White House (with the knowledge of both Barack Obama and Hillary Clinton) have been backed up by growing evidence of an undercover US Fed ‘swap’ deal to bankroll Mario Draghi’s eurobank liquidity programme . As a quid pro quo for this disguised loan, the US demanded a ‘leper’ default for Greece – with a much bigger European-funded contagion firewall than currently exists. But the plans may be derailed by intransigence in Berlin. END_OF_DOCUMENT_TOKEN_TO_BE_REPLACED