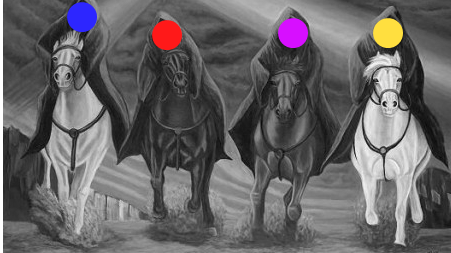 THE FOUR HORSEMEN OF ACROCKASHITSAs the Four Horsemen of the Apocalypse pick up speed for the last lap around the crumbling Acropolis that used to be the United Kingdom, we face a unique Election run-in where three of the Horse-heads lie uneasy on their shoulders, and the fourth (has he been doped?) is destined for the glue factory.

David Cameron looks a little silly this morning, as it emerges that the extra £1.7bn we have to pay the EU is there on page one of the rulebook. He hasn’t got a leg to stand on. The rule doesn’t either, but he signed up to it so now he’ll have to grin and bear it. Another 500 thousand votes for Faisal Naraj, kerr-ching Ithangyoo. END_OF_DOCUMENT_TOKEN_TO_BE_REPLACED