Russia‘s anti-government protest movement gathered momentum has as tens of thousands of people said they were prepared to take to the streets this weekend in the biggest challenge to Vladimir Putin‘s rule. END_OF_DOCUMENT_TOKEN_TO_BE_REPLACED

Posted on October 2, 2011 by lucas2012infos | Comments Off on ‘Occupy Wall Street’ Protests Spread Across the Country | Common Dreams

The Occupy Wall Street movement, growing to more than 1,500 people in its second week, called for a march in lower Manhattan today at 3 p.m. to “show that it is time that the 99% are heard.”

An elderly group leads a march up Broadway towards Police Headquarters, Friday, Sept. 30, 2011, in New York. (Louis Lanzano/AP Photo)“We are unions, students, teachers, veterans, first responders, families, the unemployed and underemployed. We are all races, sexes and creeds. We are the majority. We are the 99 percent. And we will no longer be silent,” read a post on the Occupy Wall Street website.

The  protests started on Sept. 17. On Friday, about 1,500 demonstrators took their protest to the New York Police Department headquarters.

The demonstrators, who are speaking out against corporate greed and social inequality, say they have been unnecessarily roughed up by police.

The turnout may have been so high because a rumor circulated that the band Radiohead would perform at the event. The band did not appear at event.

“The protesters are protesting against people who make $40,000 to $50,000 a year who are struggling to make ends meet. That’s the bottom line,” Bloomberg said.

When asked how the NYPD would handle protests, Bloomberg said that while people have the right to protest, others also have the right “to walk down the street unmolested.”

The protests have spread across the country, with events popping up in Boston and Chicago in solidarity with Occupy Wall Street.

A march and rally was held in Boston Friday called “Take Back Boston” run by the Right to the City alliance, a national organization that “seeks to create regional and national impacts in the fields of housing, human rights, urban land, community development, civic engagement, criminal justice, environmental justice, and more,” according to its website.

“We are targeting Wall Street, in particular the big banks and corporations,” Rachel Laforest, the executive director of the Right to the City Alliance told ABC News. “The goal is to create a national narrative and have it be known how the states are taking state revenues that are being funneled to banks and corporations and then you layer on top of that the fact that they’re not obligated to pay their fair share of taxes, and so that’s billions and billions of dollars that could be put toward job creation and creating solutions to the housing crisis.”

Today’s events in Boston will continue with a “Take Back the Block” festival. At least 1,500 have registered for the festival.

Along with New York and Boston, an Occupy Chicago movement has emerged, with nearly 100 people gathering in front of the Chicago Federal Reserve Bank. The protests have been peaceful and no arrests have been reported.

Occupy Los Angeles protests which have also been small in numbers, has called for a march today at 10 a.m. from Pershing Square downtown to City Hall.

Posted on September 28, 2011 by lucas2012infos | Comments Off on World As Scorn For Vote Grows Protests Surge Around The Globe – NY Times

“Occupy Together” Looks Like the Movement to Unify All Protests

Posted on September 28, 2011 by lucas2012infos | Comments Off on “Occupy Together” Looks Like the Movement to Unify All Protests

“Occupy Together” Looks Like the Movement to Unify All Protests. via 2012IndyInfo.wordpress.com by Steve Beckow 28th September 2011 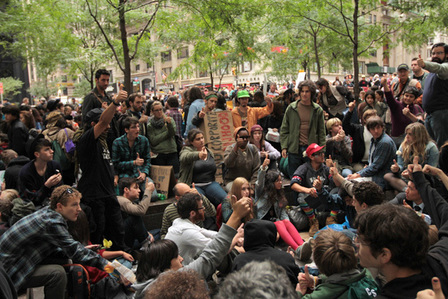 been wondering what the match would be that would cause the straw to catch fire. I think the “Occupy Together” movement is that match. “Occupy” movements are being organized in every city across America and some cities internationally. Watch for this movement to take off.

Posted on August 13, 2011 by lucas2012infos | Comments Off on Israel protests for reform set to spread – Middle East – Al Jazeera English