George Osborne announced a £140bn emergency scheme to try to avoid a second credit crisis caused by the ongoing chaos in the eurozone. Here is his speech in full.

“Today, we publish a White Paper setting out how the Government plans to implement those recommendations in detail.

High-street banking will be ring-fenced so that taxpayers are better protected when things go wrong.

We will be able to bail in creditors when a bank fails rather than turning to the public purse.” (Lucas: define creditor… is that not also you the public also….”Creditor= a person or entity to whom a debt is owed.” It means ALSO you as the corporate legal entity called person. )

“We are today investing more in building new road and new rail, including Crossrail here in this City, than at the height of the spending boom – because that is a use of taxpayers’ money that gives a real economic return.” (Lucas: I hope this can be backed with with verifiable evidence or data showing real tax spending on infrastructure is on the up….)

“I have argued for a year now that the eurozone need to follow the “remorseless logic” of monetary union” towards much greater fiscal integration.” (Lucas:  they are wanting the EU to tax us….. next to the member states already taxing their citizens also….It will not be less tax but more you will pay.)

Read the full article and speech at : www.telegraph.co.uk/ link to original article

(Lucas : had missed this article as it show the protection of the little city within the world that is about financial and debt exploitation of humanity in a slavery system.)

QUOTE : The Government has been told it must take a more “muscular” approach to defending the UK’s financial services industry from increasingly restrictive European regulations.

Read the full story at : www.telegraph.co.uk / link to original article

3D printing devices are already being used to make all sorts of components – but none of them edible.

Hordes of bankrupt French invade Switzerland to get their hands on their “stolen” money — such is the imaginary scenario cooked up by the Swiss military in simulations revealed over the weekend.

Quote : “Carried out in August, the apparently outlandish army exercise was based on the premise of an attack by a financially stricken France split into warring regions, according to Matin Dimanche, the Lausanne-based daily.”

Read the whole story at www.telegraph.co.uk/ link to original article

The Co-op Bank has warned that it has “no Plan B” to rescue its finances and bondholders must accept its £1.5bn bail-out plan or it will go bust.

Euan Sutherland, chief executive of the Co-op Group, insisted the bank plan, which will see bondholders provide £500m of capital, represented the “best interests” of stake- holders in the beleaguered mutual.

Read the whole story at: www.telegraph.co.uk / link to original article

The BBC is facing criticism after it accidentally used a picture taken in Iraq in 2003 to illustrate the senseless massacre of children in Syria.

Posted on May 6, 2013 by lucas2012infos | Comments Off on TheTelegraph -German Euro Founder Calls For ‘Catastrophic’ Currency To Be Broken Up – 6 May 2013 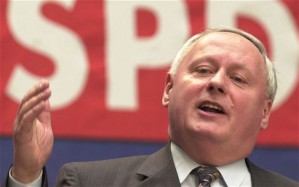 Oskar Lafontaine, the German finance minister who launched the euro, has called for a break-up of the single currency to let southern Europe recover, warning that the current course is “leading to disaster”.

Mr Lafontaine said on the parliamentary website of Germany’s Left Party that Chancellor Angela Merkel will “awake from her self-righteous slumber” once the countries in trouble unite to force a change in crisis policy at Germany’s expense. Photo: Reuters

Read the whole story at :  www.telegraph.co.uk / link to original article