We, and especially the younger generation, are under serious pharmacological assault. The psychiatry industry keeps lengthening their list of “disorders” that need to be pharmaceutically “treated”. How convenient for the drug pushers.

Read the full story at: www.wake-upworld.com / link to original article

Posted on January 22, 2014 by lucas2012infos | Comments Off on WakeUpWorld – Aboriginal Elder Speaks Out About Sacred Site Under Threat Of Mining – 22 January 2014

The NSW State Government has given permission to New Zealand based sandmining company Rocla Materials Pty Ltd to build a sand mine on a sacred Aboriginal Women’s Fertility Rites teaching place in Calga NSW, on Australia’s Central Coast. The site in question is part of the sacred Dreaming Track, and its destruction would destroy with it tens of thousands of years of Aboriginal heritage, as well as the habitat of numerous endangered animal species that are native to the area. END_OF_DOCUMENT_TOKEN_TO_BE_REPLACED

Posted on December 2, 2013 by lucas2012infos | Comments Off on WakeUpWorld – Natasha Longo – Scientists Say New Genetically Modified Wheat Silences DNA Sequences In The Human Body, Can Cause Fatalities In Children – 2 December 2013 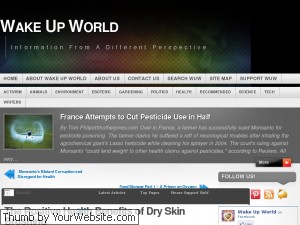 Australian researchers have revealed serious issues over a new kind of genetically engineered wheat that could induce major health threats for people that consume it.

University of Canterbury Professor Jack Heinemann announced the outcomes of his genetic study into the wheat, a kind engineered by Australia’s Commonwealth Scientific and Industrial Research Organisation (CSIRO), at a conference last month. END_OF_DOCUMENT_TOKEN_TO_BE_REPLACED

WakeUpWorld – Has HSBC Just Signaled The Countdown To The Next Big Financial Crash? – 2 September 2013

Posted on September 2, 2013 by lucas2012infos | Comments Off on WakeUpWorld – Has HSBC Just Signaled The Countdown To The Next Big Financial Crash? – 2 September 2013

Guest Writer for Wake Up World

The fuse for the next global financial meltdown may have just been lit. A recent article published 3rd August 2013 by the Daily Mail Online reveals some interesting, albeit unassuming, information regarding the situation of global finances. END_OF_DOCUMENT_TOKEN_TO_BE_REPLACED

Comments Off on WakeUpWorld – Has HSBC Just Signaled The Countdown To The Next Big Financial Crash? – 2 September 2013

It is a simple fact that most thinking people view our current environmental situation as in a crisis. To me, this is the viewpoint of separation. I am aware that my view of Nature is not a popular one … that humanity is crisis-inclined … but nevertheless, I intend to give a brief outline of a more wholistic viewpoint. END_OF_DOCUMENT_TOKEN_TO_BE_REPLACED

We grow up thinking and believing that the world and reality in which we exist in is something tangible and physical and is just as is perceived. However, not only does this thought-process become disillusioned with various difficult-to-explain phenomena, but perceptions becomes realized as completely subjective that do not reflect an objective reality, if such a reality even exists. With the significant advances in the knowledge and information attained by the human race in its most recent history, radical shifts in how reality is perceived are being formulated. END_OF_DOCUMENT_TOKEN_TO_BE_REPLACED

Comments Off on WakeUpWorld – Paul Lenda – Living In A Hologram: Our Holographic Reality – 20 July 2013

We have all been concerned about the implications of Genetically Modified (GM) foods. And one company that has received much controversy is Monsanto; established in 1901 in St. Louis, Missouri.

Their involvement in countless controversial endeavors is nothing short than an attack on humanity! END_OF_DOCUMENT_TOKEN_TO_BE_REPLACED

We are in a “baking” season! But so many people these days have problems with grain consumption. Gluten sensitivities, obesity and celiac disease are on the rise and directly related to grain consumption, especially processed grain. Sensitivities became so severe in some people that they can’t even tolerate soaps containing gluten on their bodies. END_OF_DOCUMENT_TOKEN_TO_BE_REPLACED

The energy of the world is making a shift. Energy is rising. Chaos is rising. Whether we are aware of it or not, this is causing a huge reaction in humanity. You could say that there are the believers (the few), and the non-believers (the many). Interesting times! History indicates that the few have always been right; the many, wrong. Are we to repeat history? We are in a unique period of living transition. END_OF_DOCUMENT_TOKEN_TO_BE_REPLACED

The ‘Australian Government’ is now set to ‘legally’ seize money from citizens bank accounts without their knowledge or approval.

After legislation was rushed through parliament, the government will from May 31 be able to transfer all money from accounts that have not been used for three years into their own revenues. END_OF_DOCUMENT_TOKEN_TO_BE_REPLACED