Posted on September 24, 2012 by lucas2012infos | Comments Off on Der Spiegel – Up To Two Trillion Europe Plans To Leverage Euro-Zone Bailout Fund – 24 September 2012

Officially, the ESM permanent euro-zone bailout fund is worth 500 billion euros. That, though, might not be enough, which is why euro-zone governments are now planning to introduce levers that could mobilize up to 2trillion euros, SPIEGEL has learned. Finland, though, is skeptical of the idea.

With the launch of the permanent common-currency bailout fund, the European Stability Mechanism (ESM), just around the corner, euro-zone member states are looking into ways to leverage the €500 billion ($647 billion) available to the fund, SPIEGEL has learned. But with Finland still concerned about the leveraging plans, it is unlikely that they will be initially included when the ESM is launched on Oct. 8. END_OF_DOCUMENT_TOKEN_TO_BE_REPLACED 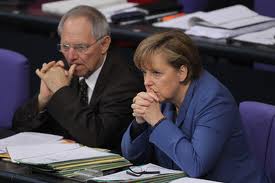 Schäuble and Merkel….implicated in an incredible scam

How Venizelos fired ELSTAT moles to cover up the truth

German Finance Minister Wolfgang Schäuble rebuffed recent criticism of Germany’s handling of the euro crisis from Barack Obama, telling the US president to get his own house in order before giving advice. END_OF_DOCUMENT_TOKEN_TO_BE_REPLACED

John Ward – Breaking : German Supreme Court Rules Against Merkel On ESM. Will She Now Recognise The Rule Of Law? – 19 June 2012

The Karlsruhe judges today found that the center-right coalition government led by Chancellor Angela Merkel had breached the rights of the German parliament by failing to sufficiently inform lawmakers during negotiations towards the creation of the permanent euro rescue fund, the European Stability Mechanism (ESM).

This decision is “a further important building block in a series of decisions by the Constitutional Court that strengthen parliamentary responsibility in the context of European integration,” the president of the court, Andreas Vosskuhle, said.

But is it? If – like the case for a Weimar ruling against Nazi violence in 1931* – it is simply ignored, then what good is Karslruhe?

The decision follows another that the court handed down in February, in which it struck down a plan to create a committee of just nine members of the Bundestag to decide in secret about emergency measures regarding the euro. Then too, the court argued that the entire assembly must be involved in such decisions.

But it did not declare an ESM unconstituional in Bundeslaw…even though it obviously is, because of the anti-fiat money printing clauses in the BundesRepublik constitution.

Ironically, the court heard the case based on a complaint brought by the opposition Green party. No members of the anti-Warmist Right were to be seen anywhere in all this. Equally ironic is Wolfgang Schäuble’s obsessive fixation with a hyperinflation that occurred under entirely different circumstances ninety years ago.

However, far more significant than any irony is the reality that the Bundestag and the upper house, the Bundesrat, are expected to approve the creation of the ESM when they vote on the issue on June 29.

The educated sector of German life needs to get on top of this…unless Germans want to change their nation’s name to ‘DDR’.

* In 1931, the German Jewish lawyer Hans Litten became the only ordinary German citizen ever to bring Adolf Hitler into Court and interrogate the future Fuhrer. Litten’s demolition of Hitler’s argument that the Nazis were a peaceful, democratic movement earned the lawyer years of brutal persecution.  His obviously valid case against the Nazis was undermined throughout the trial by a frightened Judge. He died in a concentration camp in 1939.

Germany and Spain are both digging in their heels. Courtesy of el Economista and Google Translate, please consider Germany pressed for Spain to resort to bailout fund.

German Finance Minister, Wolfgang Schäuble, have pressured the Spanish owner of Economy, Luis de Guindos, for Spain to resort to European rescue fund, fearing that fails to stay afloat on its own. END_OF_DOCUMENT_TOKEN_TO_BE_REPLACED

Posted on May 31, 2012 by lucas2012infos | Comments Off on John Ward – Greek Scare-Tactics Continue As Berlin Remorselessly Plans A Future Fiscal Union Dominated By Wolfgang Schäuble – 31 May 2012

There was more Domesday scariness from the National Bank of Greece on Tuesday. If Greece exits the euro, its latest report suggested, the events would lead to a devaluation of the new currency by 65%,  a GDP nosediving by 22%, 34% unemployment, and income per capita nearly halving to 55%. END_OF_DOCUMENT_TOKEN_TO_BE_REPLACED

You always know where you are with Evangelo Venizelos: on the gravy train.

The possibility of Greece forming a unity government appears to have grown following talks between PASOK leader Evangelos Venizelos and Democratic Left chief Fotis Kouvelis on Thursday. The two leaders met after Venizelos took over the mandate to explore the possibility of cooperation between the parties elected on Sunday. Both suggested that they were happy with the direction of their talks. END_OF_DOCUMENT_TOKEN_TO_BE_REPLACED

Posted on May 6, 2012 by lucas2012infos | Comments Off on John Ward – Greek Election : Wolfie Strangelove & His Bankers Go Election Manipulating…With Their Customary Level Of Subtlety – 6 May 2012

The Institute of International Finance (IIF) managed to get right up Antonis Samaras’s nose this weekend, thanks to a report it issued suggesting that his New Democracy Party and PASOK would have to form a post-election government. As the other Parties didn’t like the bailout much (on the grounds that it only makes the Athens debt worse and worse) then the Greek authorities would have to ignore the election result, and appoint an administration of technocrats ready to stick to the terms of the bailout – and remain in the euro

Comments Off on John Ward – Greek Election : Wolfie Strangelove & His Bankers Go Election Manipulating…With Their Customary Level Of Subtlety – 6 May 2012

With the help of Frankfurt and Parisian sources, US contacts, and German readers of this site, The Slog has been able to put together compelling evidence of Greece being perilously close to ejection from the eurozone. Doubts in Brussels and the IMF, preparations in Berlin – and clauses in the bailout agreement – all point to a German determination to either amputate Greece, or leave the eurozone itself. END_OF_DOCUMENT_TOKEN_TO_BE_REPLACED A written document giving firm dates and detailed actions for a planned Greek default has been in the possession of two top Wall Street bank currency trading bosses since the second week in January. The Slog has separate but corroborative sources affirming the existence of the document, and a conviction among senior bank staff that – at least at the time – the plan represented “a timetable, not a contingency”. The plan gives a firm date of March 23rd for default to be announced after the close of business. END_OF_DOCUMENT_TOKEN_TO_BE_REPLACED